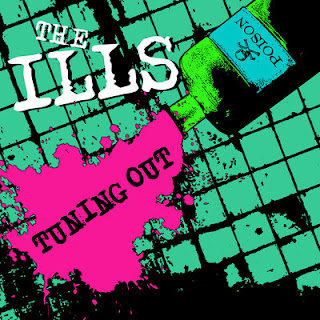 I first reviewed The Ills early this year, and in my usual manner I got pretty excited. I recall running around the house shirtless and frightening the cats. Fireworks were brought out of storage. The neighbors complained I was writing too loud. And, so, having had almost 12 months to get myself fired up for the Iowa City band's debut full-length, I had enormous expectations for Tuning Out. And still, somehow, I was blown away by the thing. What a great freakin' record!

My original take on The Ills referenced the glory days of Rip Off Records and classic bands like The Spastics and Loli and the Chones. And while I won't disavow those associations, over the course of a full album I'm also getting a strong late '70s/early '80s California punk vibe and even a touch of early '90s Olympia. The Ills take a little bit of a horror punk angle on quite a few tracks, and on others they suggest what might have happened if the Angry Samoans had mated with X. The formula, perfect from the beginning, has not been tampered with. No songs run longer than a minute and a half, and the band tears through each one with an awesome mix of ferocity and tunefulness. Dynamo lead Singer Erika E. Bola has got a lot of names on her shit list, and she's not exactly shy about speaking her mind. You may have guessed that "Nominate U to Die" is not a love song. And "1-2-3 Hate U", a master stroke of bratty punk rock, has even cheery old me reveling in misanthropy!

Tuning Out - with its varied blend of hate, horror, and tacos - reminds me why I fell in love with punk music in the first place. It's fun and loud and brilliantly simplistic. The songs, often over in less than a minute, waste little time in getting to the good part. If I were 15 and heard this record, it would totally inspire me to go out and start a band tomorrow. The Ills have achieved something that's a lot more difficult than it seems - delivering an album as thrilling and satisfying as their debut EP. The newer songs - like "Delete U", "Somewhere Not Here", and the title track - positively smoke. There was a time when great straight-ahead punk records like this were commonplace. Sadly, they are not anymore. Perhaps The Ills will ignite a renaissance. Vinyl coming soon on the legendary Big Neck Records!