Neighborhood Brats are back! 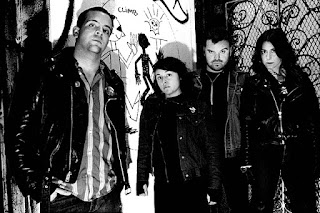 It's kind of cliche to maintain that a certain band sounds like it just stepped out of a time machine. But sometimes, ya know, it's true! California's Neighborhood Brats have nailed that VKTMS/Legal Weapon femme-fronted hardcore punk sound so perfectly that you could easily pass off their recordings as unearthed treasures from thirty years ago. In a day and age in which new punk rock modeled on old punk rock too often sounds like a pale imitation, Neighborhood Brats could legitimately stand toe-to-toe with their musical heroes. I could put 'em on a mix with The Avengers and Black Flag, and they'd fit right in. Latest single "Ocean Beach Party" is the best thing the band has released yet - a quick blast of archetypical California punk rock that totally leaves me wanting more. The A-side is fast and furious and instantly classic. Don't be fooled by the title. For sure, it's not that kind of beach party! What I've always loved about old-school California punk is that winning combination of catchy melodies and a decidedly dark tone. Neighborhood Brats have that going on here - particularly on the ominous, surfy "Shark Beach". We've been hearing from this great band in very small doses over the last couple of years, and every time they've brought the heat. Will 2013 perhaps be the year we get a full album? Let's hope!

i got this as soon as i read this and heard the sample. you should do the same . reminds me of Red Cross posh boy record. i can't say that about too many records.if the past is the future of punk , i'm cool with that.