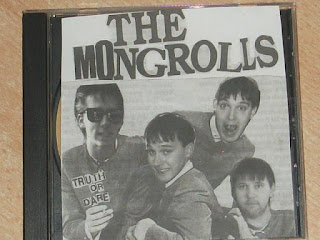 The Mongrolls hold a particularly special place in F & L lore. They were one of the first bands I ever reviewed for this blog. I use the word "they" loosely since it's really just one guy doing everything. Vocals, guitar, bass, drums, recording, CD pressing, publicity, mail order - Greg does all of it. He is a true renaissance man. When the long-awaited third Mongrolls album Truth or Dare arrived in the mail, I explained to my wife that Greg Mongroll is like Prince. "So he's short and pretentious?" she replied.

There are two things I especially love about The Mongrolls. One is that they don't sound like a one-man band. The other is that while Greg brings a variety of musical influences to the table including power pop, first wave punk, and old-school hardcore, the end product always sounds like The Mongrolls. And we need more bands these days that sound like The Mongrolls. If you miss that classic '90s lo-fi garage punk sound, Truth or Dare will be music to your ears. Given the years of anticipation leading up to the release of this album, you might say this is Greg's Chinese Democracy. Except Greg can't afford the services of Tommy Stinson, and there are no songs that sound like Nine Inch Nails. Instead think Teengenerate, the Spider Babies, and countless Rip Off Records one-hit wonders. Truth or Dare, far from an homage to Madonna's high fashion electro-pop era, is 100 percent vintage Mongrolls. Trashed-out bargain basement production? Check. Ear-battering distortion? Check. Vocals that are a cross between a ranting professional wrestler and a deranged Ralph Kramden? Check! There's even the usual assortment of cover songs, all done up Mongrolls style. There's no denying Greg's considerable songwriting prowess ("Smash It" and "Drunk Again" are modern classics of garage punk in my book), but I always enjoy his interpretations of other bands' material. This time he has a go at Loli and the Chones, Unnatural Axe, Menace, and The Minds. Yeah, I know: that's some great taste in music. Plus they're cool versions. It seems like in the current age, people look down on cover songs like they're filler or something. Compare that to say, in the '60s, when the craft of interpreting someone else's song was rightfully viewed as artistry itself. I mean, where would this world be without Aretha Franklin's version of "Respect"? So there you go. Greg Mongroll is like Prince. And Aretha Franklin.

I do believe that while a handful of copies of Truth or Dare saw the light of day last year, technical difficulties at the pressing plant (i.e. Greg's house) delayed a full-blown release until recently. But having finally heard the album, I have to say it was definitely worth the wait. And for seven bucks post-paid, you won't find a better value anywhere. Plus now it's a really short wait until the next Mongrolls album, Get Dumb. That's due later this year! Two albums in one calendar year? I told you he's like Prince!

Thanks so much, Josh!