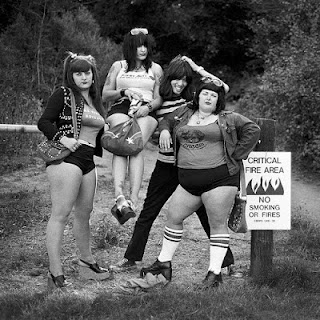 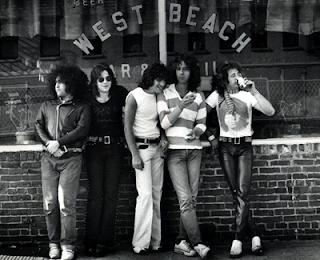 Exactly one year ago, Faster and Louder debuted with a post on The Keefs. Hard to believe it's been a year already! In honor of this blog's first birthday, I figured something special was in order. I wanted to do something fun, something that could perhaps become an annual tradition. So I thought to myself, "How about my top five list of greatest rock n' roll songs of all-time?" I keep top five lists of everything: favorite movies, best chili, dream jobs, worst beers, coolest celebrity mustaches, tastiest Slurpee flavors, most underrated '90s sitcoms (Herman's Head all the way!), most overrated quarterbacks...you name it, I've listed it. Of course these lists change over time, and in particular my "top five greatest rock n' roll songs of all-time" list has gone through its fair share of additions and subtractions. Today I unveil the latest version of the list. It's a little "outside the box". There are no obvious choices here. No "Satisfaction", no "Louie Louie", no "Johnny B. Goode". There was no logic or critical perspective considered. I went straight with what my gut was telling me. If aliens rang my doorbell and asked me to introduce them to the rock n' roll music of the planet Earth, these are the first five tunes I'd play for them. Without any further ado, the list:

1. Real Kids - "All Kindsa Girls"
Some people might think this is more of a power pop song than a rock n' roll song. I say it's both. I mean, come on! If you don't think the Real Kids are rock n' roll, you don't know rock n' roll. One thing's not disputable: this song is sheer perfection.

2. Dictators- "Stay With Me"
I named this blog after a Dictators song for a reason. This is their greatest song. Their second greatest song, "Who Will Save Rock N' Roll?", is also in my top ten.

3. Stooges- "Search and Destroy"
This used to be my #1. Now it's #3. I don't like to think of that as a demotion. I think of it as a promotion for "All Kindsa Girls" and "Stay With Me". Or we could just blame David Bowie.

5. Bobbyteens- "Firecracker"
You're probably wondering what this song is doing in my top five. I'm wondering why it's not at #1! "Firecracker" is one of the band's earliest songs - an absolutely genius amalgamation of lo-fi garage punk and '60s girl group pop, delivered with trashy abandon and libidinous glee. Tina Lucchesi's vocal on this track is absolutely classic. Listen and love!


Alright! Barring an unexpected apocalypse or unforeseen imprisonment, I will be back in 365 days with an updated version of this list. I guarantee you there will be changes. "Baby, I'm A King" by The Devil Dogs is currently #6 with a bullet!

my one year is coming up in a couple days!!! weird!

Came here six months ago and just writing to say I really enjoy your blog (and associated spinoffs). I love your enthusiasm both for sounds old and new. Great stuff.