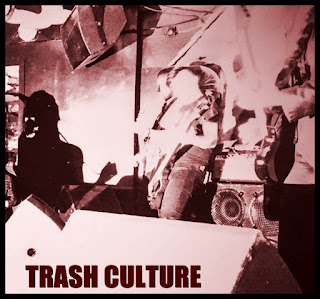 I love it when a band describes itself far more profoundly than I ever could. London's Trash Culture says it's "playing music because we have to, for if we don't we will kill our work colleagues". That's brilliant, and I don't doubt those words for a second! On its debut release, Trash Culture tears into eight tracks of fantastically pissed-off punk rock. Cunha on lead vocals sounds like he's fed up with everything and everyone, and for damn sure we're all gonna hear about it! (You can surmise that "I Wanna Die" is not a ballad). Musically, this is just straight-up ripping punk that recalls everyone from the Zero Boys to Anti-Nowhere League to the Dead Boys to GG Allin. Cunha is a real deal screamer, and these are songs you'll want to shout along with loudly while you pogo into the night. Ben Perrier from Los Pepes recorded and mixed this album, and it sounds crackling! Trash Culture likes to joke about being the opening band that nobody gets to see, but I have a feeling they'll be ascending to headliner status in short order. Here's hoping they someday come to the States and play with The Hot LZ's. Imagine the havoc they'd wreak!

Many thanks for the review.
All the best.