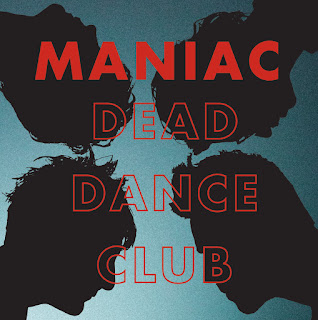 Man, have we ever had an astounding flurry of new album releases over the last couple of weeks! The barrage continues with the second album from MANIAC, who have been a little quiet since releasing brilliant singles back in 2015 and 2016. I would definitely consider myself a MANIAC, so of course I was eager to hear the long-awaited Dead Dance Club (out today on Hovercraft and Dirt Cult Records). The band's first LP Demimonde from late 2014 is, in my opinion, an overlooked gem of present-day punk albums. I wouldn't change a thing about it, but I appreciate that Dead Dance Club is a little different. Sure, MANIAC can still do fast and frantic punk rock with the best of 'em. The opening 1-2 punch of "City Lights" and "Subject To Change" might lead you to believe that this album is headed down the same dizzying path as the last one. But then comes the moody and modern "Neutral Libido", and it's quickly apparent that the band has upped its game. It all still sounds very much like MANIAC - edgy, energetic, and forged in the storied traditions of West Coast punk and pop. But the band has really pushed itself to expand its sound on this release. There is no shortage of ripping tracks, but standout numbers like "Modern Love" and "Post Post World" really give the album atmosphere and room to breathe.

One of MANIAC's greatest strengths is that it has four songwriters and four essential contributors. Singer/bassist Zache Davis is probably considered the "front man", but on quite a few of these songs he trades off vocals with his band mates. F & L favorite Justin Maurer authored some of the album's strongest tracks. Andrew Zappin is one of my favorite lead guitarists working today. James Carman, in addition to being an incredible drummer, is a tremendous pop songwriter and vocalist. That's a whole lot of talent, but it's the way it all comes together that defines MANIAC. You can hear that in the interweaving of the two guitars, the sophisticated layering of the vocals, and Carman's soaring harmonies. Davis, quickly emerging as a modern master of odes to failed relationships, contributes the deliciously bittersweet "Neutral Libido" and crackling "Living In Stereo". The latter brings to mind a Cali-soaked Buzzcocks. Maurer's songs cover a range of topics from youth and the loss of innocence ("Children of the Dirt") to how our contemporary society no longer believes in anything ("Post Post World"). The reappearance of three 7" tracks was music to my ears because they were just too good to leave out ("Calamine", to me, is a top five MANIAC song). And then there's "Dead Dance Club", which I absolutely love! It's completely unlike anything the band has done before, yet it fits so perfectly on this album. This song has me envisioning MANIAC as a band in a John Hughes movie!

MANIAC is a band like no other - distinctively part of the modern wave of powerpop/punk yet so undeniably influenced by the art and multiculturalism of Southern California. Those last two singles suggested that MANIAC was on the verge of a significant step forward, and Dead Dance Club fully confirms that. "Maturity" in punk groups is often considered risky or downright counterproductive. In this case, however, the advancements in songwriting and production really hit the spot. Demimonde was a very good album. Dead Dance Club is a genuinely great one.