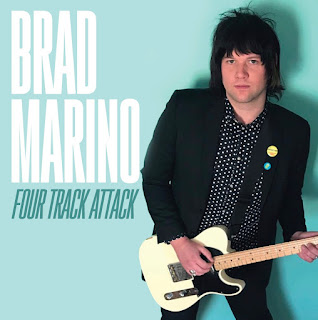 I've been teasing it for a while, and now it's finally here! Out on Beluga Records, Four Track Attack is the debut solo release from Connection singer/guitarist Brad Marino. Naturally I was enthused to receive new music from one of my favorite singers. And the bonus is that two of these songs were contributed by New Trocaderos songwriter Michael Chaney!

Four Track Attack is a solo effort in the truest sense: all instruments and vocals are by Brad Marino. With Marino breaking out on his own for this EP, there was always the possibility of him doing something way different from The Connection. I would have been perfectly okay with that, but at least on this release Marino is keeping it in his wheelhouse. If you've loved all of the Connection and New Trocaderos records, you'll love Four Track Attack as well. "Should've Known" hits that sweet spot where power pop intersects with good old rock n' roll. It's got it all: a great hook in the chorus, stellar backing vocals (imagine: an army of Brad Marinos!), and a fade-out ending tailor made for radio. Chaney wrote "Hey Girl" especially for this project, so it's no surprise that this Stonesy number suits Marino's talents so well. Marino absolutely rips it on guitar - recalling Keith Richards AND Mick Taylor all at once! Lyrics about a fellow finally giving the heave-ho to his shamelessly unfaithful lady are timeless in a way that we've come to expect from Michael Chaney. This song could easily have been written by a blues man 60 years ago, yet it's no less relevant today. "On The Brink" hints at a Ramones influence, but really it's vintage Brad Marino hard-driving rock n' roll. That "things are changin', and I'm on the brink" refrain is gonna be stuck in my head for weeks! To finish, the Chaney-penned "Special Friend" has that Dave Edmunds type feel that should appeal to any fan of Marino's bands. Again, that guitar work is smokin'!

What I'll say about this four track attack is that none of 'em are throwaways! All four of these songs are top-notch rockers. And serving as his own rhythm section, Marino more than holds his own. Even when you already play in the best band in the world, I think it has to be super fun to go into the studio and make a record that's entirely yours. I was definitely keen on the idea of a Brad Marino solo record, and Four Track Attack does not disappoint. I dare Mick Jagger to make a solo record this good!