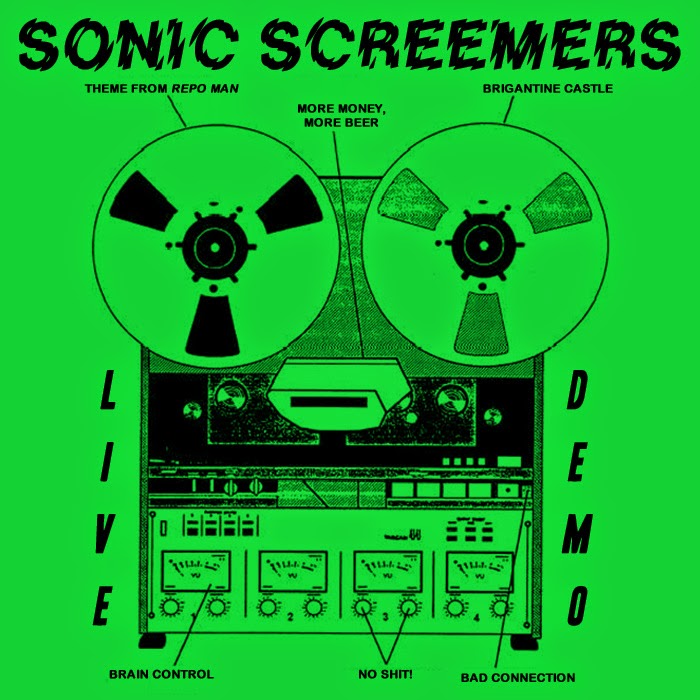 With a lineup featuring Peter Santa Maria (Jukebox Zeros, The Thirteen) along with Jack and Bryan from The Flyswatters, Philadelphia's Sonic Screemers are a band I was sold on before I had even heard a single note of their music. And now that I have heard their music, all of my suspicions have been confirmed. Sonic Screemers are the real deal! A description like "West Coast-influenced rockin' punk and surfin' riffs with an East Coast attitude" might bring to mind a certain band that's ruling the terrain 90 miles up the turnpike. But while I could totally envision these guys going over well with Night Birds fans, Sonic Screemers have got their own sound for sure. In the way they play blistering rock n' roll at hardcore speeds, I'm reminded quite a bit of the Zero Boys. And perhaps it's just the two-track recording, but to my ears it sounds like these fellas are also huge fans of trashy garage punk. Titled simply Live Demo, the band's debut release captures the foursome in its earliest stages of existence. Essentially these are rough demos - committed to tape before Sonic Screemers had even played their first show. There's something so primitive and exciting about these tracks. It's like these guys got together and immediately knew they had something. I just love the raw energy and sheer force of these songs. "More Money, More Beer" and "No Shit!" could easily pass for tracks from a long lost Rip Off Records single. And you have to love that they open with "Theme From Repo Man"! Surely this band will completely blow my mind once they write a few more songs and get into a proper studio. But I get the feeling that people will always look back at this demo and say, "That thing was freaking awesome!"