The Speedways - "Shoulda Known"/"A Drop in the Ocean" 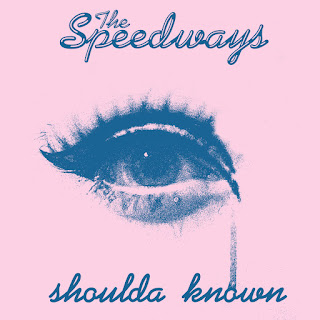 Well this was a very nice surprise! I was fired up to write about a brand-new Speedways single at the end of this month. And then just like that, said single popped up on Bandcamp a few weeks early -- accompanied by a shiny new music video. On that note, let us welcome to the world the first new original songs from The Speedways in over two years! It's no secret that The Speedways are one of my favorite bands (perhaps even my singular favorite band at this point). I've been waiting a long time to hear these tunes, and they do not disappoint. "Shoulda Known"/"A Drop in the Ocean" will be available soon on vinyl from Snap!!/Hurrah Musica & Beluga Records. These two Matt Julian/Mauro Venegas compositions are vintage Speedways songs in both style and theme. "Shoulda Known" is two minutes and 53 seconds of power pop bliss featuring a knockout chorus and a typically impassioned lead vocal from Julian. As Speedways songs tend to do, "Shoulda Known" laments the devastation of heartbreak -- in this case, one that would have seemed inevitable to any clear-thinking person. But rarely do we as humans think clearly when it comes to matters of the heart. Your head tells you one thing, but your heart tells you another. And as you invariably find yourself picking up the pieces, you thank the heavens that Speedways songs exist. Shot & produced by Jez Leather, the music video for "Shoulda Known" is a fantastic-looking performance clip filmed on location at The Lexington in London.
While I sometimes struggle to type the words "double A-side" with a straight face, the phrase is unavoidable in the case of this single. I've been so stymied trying to decide whether "Shoulda Known" or "Drop in the Ocean" is "the hit" that I've thrown my hands in the air and called it a tie. With "Drop in the Ocean," The Speedways have managed to churn out a radio-worthy ballad of such grandeur that it somehow makes me nostalgic for 1980s school dances that I never actually attended. Matt Julian always sings these epic tearjerkers like he means it. His secret is that he really does. And that melody is to die for. What kind of shit world are we living in where a song like this is not all over the radio?
"Shoulda Known"​/​"A Drop In The Ocean" is an absolute must for power pop fans. It arrives in advance of The Speedways' forthcoming LP Talk of the Town, which is due out in November. You can pre-order the vinyl single at The Speedways Bandcamp. That cover art looks familiar, doesn't it? Call me if you figure it out.
-L.R.
https://thespeedways.bandcamp.com/album/shoulda-known-a-drop-in-the-ocean-single
https://www.facebook.com/JustAnotherRegularSummer/
https://www.instagram.com/thespeedways/
https://hurrahmusica.bandcamp.com/album/shoulda-known
Posted by Lord Rutledge at 12:26 PM

Hoping Lord Rutledge is doing okay. A week-and-a-half is way, way too long to go without his great punk and power pop recommendations and reviews!