The Yum Yums - For Those About To Pop! 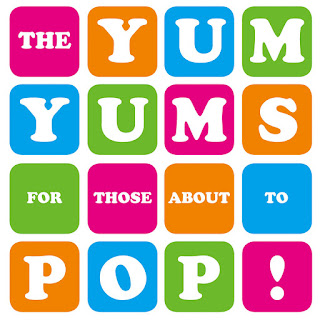 Behold one of the most "pop" albums ever made! And with a title like For Those About To Pop!, anything less would have been a huge letdown! For Those About To Pop!, the fifth album by Norway's long-running power pop sensations The Yum Yums, will be released on LP two weeks from today on the venerable Screaming Apple Records. Waterslide Records out of Japan, Rum Bar Records out of the USA, and House of Rock Records out of Norway will all be releasing the album on CD. And let me tell you: if you're a fan of The Yum Yums' previous four albums, you're gonna go WILD for this new one!

For Those About To Pop! of course sounds like a classic Yum Yums album. I'll take that a step further and say that this is the band's best album yet! Morten Henriksen is a true pop god, and he's at the height of his powers here. This is the ultimate feelgood pop record. It's bursting with catchy melodies, punchy guitars, soaring harmonies, fun lyrics, and some of the most addictive choruses you'll ever have the good fortune to encounter. Henriksen follows the same recipe that has worked for the past 27 years: take one part Ramones, one part power pop, and one part early '70s glam & bubblegum; mix it all up, and pour it out with maximum enthusiasm. The Yum Yums were one of the first bands in the '90s to bring power pop into the punk world, which put them at the forefront of a genre we now call powerpop/punk (Seriously, how many punk rockers did you know in 1993 that were into The Barracudas and Paul Collins Beat?). For Those About To Pop! proves that The Yum Yums are still masters of this musical aesthetic. It's perhaps the most energetic and optimistic of all the band's albums. Henriksen has certainly authored his share of bitter love songs, but the vibe on this album is full-on upbeat. He's written a bunch of songs about falling in love, being in love, and hoping to fall in love. Heck, he's even written a couple of love songs to pop music itself! A good many of you will want to adopt the title track as your new personal anthem. In a better world, "Baby Baby" and "The Kind of Girl" would be massive, million-selling radio hits. "Crush On You" has me reliving the glorious new wave summers of my youth. "First Move" (featuring lyrics written by the illustrious Wayne Lundqvist Ford) and "Can't Get Enough of Your Lovin'" take it even further back to the heyday of teenybopper glam rock. Honestly, I could have singled out any song on the album. It's nothing but gold from beginning to end!

With seven years having passed since The Yum Yums released their last album Play Good Music, it's no surprise that For Those About To Pop! is so stacked with hits. Even better, this album feels like a statement. It's not just another Yum Yums album. It's the ULTIMATE Yum Yums album! It seems redundant to talk about this being an especially "pop" Yum Yums record, but that will make complete sense when you hear it. Clearly this was an album designed to be experienced in the warm weather months. It's a celebration of summertime fun, love in full bloom, and the pure magic of melody. Be prepared to sing along, dance a little, and have these songs stuck in your head until the end of time.