The Roxies - live at the Wild At Heart 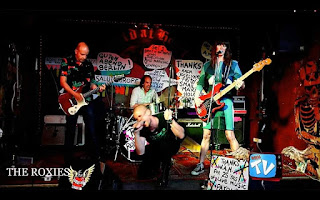 Back in March, I wrote about a delightful 7" record by Berlin-based punk group The Roxies. This band is three quarters German and one quarter English, which sounds an awful lot like my DNA. The musical DNA is a match as well: I can never get enough of high-energy old school punk with a touch of pop. At the time of my review, The Roxies were fresh off of a well-received tour of Northern England and building all kinds of momentum. Then came the pandemic. And like every other band in the world, The Roxies found themselves grounded. While they have not yet had the opportunity to play for live crowds again, they did perform at the legendary Berlin club Wild at Heart a couple weeks back without an audience. The entire performance was live-streamed, and you can now view the whole thing on YouTube. Watching this video, you'll get a great feel for the energy of The Roxies. Even though there's no crowd directly in front of them, they give an enthused and lively performance. Plus you get to see what an incredibly cool venue the Wild At Heart is! Having only heard a few songs from this band before, I was pleased to hear more. If all goes well, some of these newer tracks will turn up on the album The Roxies plan to record later this year. For now, check out this amazing set which also features a fun little interview with the band. They sure seem like lovely human beings! I want to drink beer and eat fish and chips with these people! The Roxies are all about spreading the love and giving people the chance to get out and have a sweaty good time. Someday the actual live shows will resume, and this is a band you're gonna want to see!

(You will need to click on the link to watch the video on the YouTube site. Action starts at 3:45!)