Devious Ones - "She's Waiting For Me" 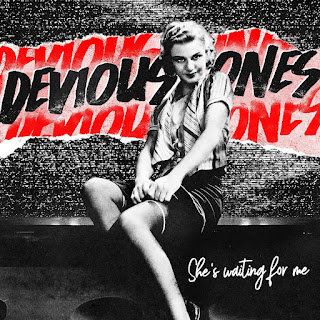 You ought to know by now that I'm a huge Devious Ones fan. One thing I especially love about these guys is that they're always surprising me. When they released "Djarum Summers" as a single, it was a song unlike anything I'd heard from them before. The highlight of their album Plainview Nights was the title track - again a tune that was totally unexpected and absolutely great. Well here they go again! New single "She's Waiting For Me", released in conjunction with the band playing its 100th show tonight, is nowhere close to the blazing garage punk you might have anticipated. And, hey, I'm always in favor of punk groups boldly expanding into new territory (I mean, come on, my favorite band is The Clash!). "She's Waiting For Me" is just a great rootsy-sounding rock and roll song. Featuring the splendid piano work of recording engineer Adam Cox, this track finds Devious Ones flexing some serious bar band chops. I don't think there's anything more universally appealing in music than a really great breakup song. This one is very well-done, thanks in no small part to a heartfelt and very believable vocal from Eric Villa. And while songs about lost love are nothing new in music, this one has a hopefulness to it that really sets it apart. I imagine it as a crowd favorite at live shows. On the flip, "The Straggle Is Real" is pop with a capital P! This tune has a great bouncy energy to it, with top-notch melodies and an irresistible sing-along hook. It's so freaking catchy that I've been whistling that melody for days on end. And man, I love that guitar solo!

"She's Waiting For Me" is Devious Ones' fourth single and every bit as essential as the previous three. It's got an A-side you can never play just once and a B-side that will keep you flipping the record over. Fingers crossed for many more singles and several hundred more shows to come!