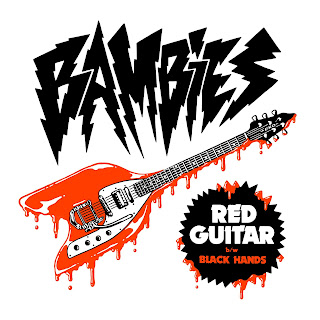 Now this is what I'm talking about! Have you ever heard a band for the first time, and within 30 seconds you just knew you were gonna love 'em? That's how it was with me and Montreal trio Bambies. Of course I had an inkling that I would like this band due to its affiliation with Reta Records. But not even that information had me fully prepared for the jolt I would ultimately get from "Red Guitar". Out now as the second-ever release from Reta Records, "Red Guitar" is the kind of song that makes me wanna wildly jump around as I shout out random interjections of joy. It's a little pop and a little punk, but above all else it's just great damn rock and roll! This song rates a ten out of ten on the head-bobbing meter, and it's so fun and massively catchy that it leaves me smiling every time. On the B-side is "Black Hands", which slows the pace but dials up the pop even more. It kind of has an early Ramones feel, but with a garage punk rock and roll edge to it that is perfectly at home in 2019 Canada. Both of these songs were previously available on Bambies' debut cassette, yet they were clearly destined to make their way onto a 7" record. There are 100 copies available on red vinyl, another 200 on black, and that's it. Do not sleep on this one!

good song, i'm sure i played it on the show months ago, not sure if that was a demo or there was an earlier version or something