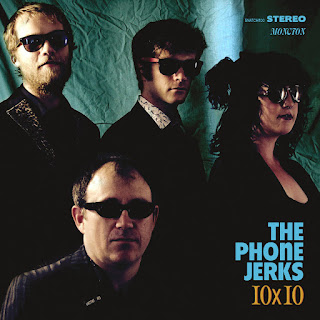 Wow! Wasn't it just a year ago that Phone Jerks suddenly turned up on Alien Snatch Records with a debut long player that ultimately became my 2018 album of the year? Here they are already with an even better followup! 10 x 10 won't be my 2019 album of the year for the simple reason that it's a 10-inch record and thus technically not an LP. I do realize that the fabled 10-inch is not everyone's favorite format. But I'm a big fan, and I think Phone Jerks have utilized it in the way the music gods intended (see also, Problematics' Blown Out and Teengenerate's Savage).

I don't know how to put this, but 10 x 10 is kind of a big deal. It's Alien Snatch's 100th release, and it also commemorates the label's 20th anniversary (I remember Alien Snatch 001 quite well: it was The Johnnies' 12 Steps To Nowhere, and never in my then 28 years had I ever handled such a thick slab of vinyl!). The title is of course a reference to this being 10 songs on a ten-inch record. But it's also the mathematical computation that equals 100 releases. Look at those Jerks with their clever hidden meanings! I'm not suggesting that Daniel has been plotting for years to make this his 100th release. But seriously: can you think of a band that better exemplifies the spirit of a label that has kept the heart of garage punk/'77 punk/power pop beating for two decades and counting? Between these four band members, they probably own a solid majority of those 100 releases. And of course Phone Jerks hearken back to those exciting times of later '90s trash punk rock and roll that certainly inspired a young man from Germany to start his own record label.

What I noticed pretty quickly about 10 x 10 is that it's a tougher-sounding affair than the self-titled LP. It's less of a budget rock party record and more of a straight-up ripping rock record. The '70s punk influence is more prevalent, and the band members take turns sounding properly fed-up on lead vocals (what was Nicholas McNally doing to these people in the studio?!). At times I'm reminded of a more pissed-off Rip Offs (wouldn't that just be Zodiac Killers?!). And Brian's songs in particular bring a Saints/Lazy Cowgirls edge that was not as pronounced on the last record. With the band pairing down the 16 songs it prepared for this release to the ten strongest cuts, 10 x 10 is the ultimate in all-killer, no-filler. All four Jerks contribute essential tracks. "Benchwarmer" is Tyler's attempt at writing a Makers song, and who can deny that the world needs way more of that sort of thing? Andrew's "Vehicular Manslaughter" makes me nostalgic for a time when I could compare a dozen bands to the Dead Boys every year. Emily's "Frigg Off" has to be the most "eastern Canadian" song title ever. It's about people who are easier to get along with when you see them as little as possible. That's kind of hilarious, but I bet everyone reading this can relate! "U-Turn To Jane's" tells the true story of when Tyler and Emily were both nearly killed just trying to get a pizza. My overall fave track is "She's Stimming Out", a song Brian wrote about the days of his daughter's autism diagnosis. This track rips it up like "Demolition Girl" crashing into "Sonic Reducer", creating the perfect energy for a tune that could not be any more loving and uplifting. This song makes me proud to be a human being.

I give 10 x 10 a ten out of ten. Every track is a smash...in the face! It's rather fortunate for me that Phone Jerks chose to release this as a 10-inch 45. When album of the year time rolls around, I will be spared the difficult choice between Phone Jerks and certain label mates/country mates of theirs. No civil wars will be breaking out on my watch! If the self-titled LP was best suited for the world famous "Who are they ripping off here?" drinking game, 10 x 10 is more like the record you put on when you feel like punching someone. I think for the practicality of everyday life, this record may be even more useful. If you still insist on hating ten-inch records, just think of this as two killer 7-inches that magically flip themselves over. Happy birthday, Alien Snatch! I will have the German beer flowing all day in your honor!

Thanks a million, Josh! D

Not an LP, but a good 20 minutes of music! Thanks for all that you do! Keep up the great work!