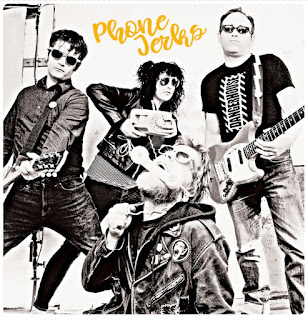 WHAT?! Phone Jerks have released an album? On Alien Snatch Records?! One of my favorite bands put out a record on one of my all-time favorite labels, and nobody knew anything about it until a week ago?! Now that was a fiercely-guarded secret! Respect!

Alien Snatch Records has been setting the standard for what a punk rock label ought to be for 20 years now. From assembling a roster including the likes of the Kidnappers, Real Losers, Fevers, Yum Yums, Minds, and Leg Hounds in its early 2000s heyday to releasing brilliant music by current-day bands such as Freak Genes and The #1s, Alien Snatch has remained a go-to for any fan of garage-punk and power pop. Moncton, New Brunswick's mighty Phone Jerks could not be a more fitting addition to the Alien Snatch family. Their debut LP hearkens back to countless beloved garage-punk LPs of the '90s and early 2000s. And I gotta tell you the thing is absolutely KILLER! Upon hearing "Nothing There", you just might find yourself convinced that The Rip Offs have gotten back together! Alien Snatch honcho Daniel has astutely pointed out that he could have released this album in any year of the label's history. These tunes are that timeless. Of course Phone Jerks sound like a band that could have been peers with Loli and the Chones, The Metros, Teengenerate, etc. Yet they also align perfectly with modern-day greats like Gino & The Goons and Sick Thoughts. This, my friends, is garage-punk the way it ought to be: trashy, lo-fi, and intentionally devoid of originality. Why are there not more bands like this in 2018?!

Being four upstanding Canadians who value your hard-earned dollar, Phone Jerks have delivered almost entirely brand-new material for this debut album (along with covers of "Revolution" by Australia's X and "Violence, Anarchy, Baby, Mother, Daddy-O, Dig" by Newfoundland punk legends Da Slyme). No tracks from the Goodbye Boozy 7" have been repeated, and only two songs re-appear from the band's demo tape. The instant you dig into "Bitchiker", you will find yourself fondly recalling a time when every new Rip Off Records release was an event worth celebrating. And come on: how can an album that begins with a song about killing someone not be the best record of the year?! These songs are all so ripping and catchy and tremendously fun to listen to. This is an album that you just have to crank super loud. And half the fun of this record is going through it track by track and asking, "Who are they ripping off here?"! The fact that Phone Jerks have three different lead singers makes it all that much cooler. Emily, Tyler, and Brian each bring something unique to the table (and you know, they all seem intent on smashing that table). The production (kudos Dave Belliveau and James O'Toole!) is spot-on for what budget rock ought to be. You know how modern-day reviewers are so fond of using "crackling" as an adjective? This album is crackling. Literally.

So why aren't there more bands like Phone Jerks in 2018? I don't know, but maybe there will be after their debut album makes the rounds! Canada is ahead of the curve as always (especially in Moncton, where they observe the Atlantic Time Zone). With me poised to name an Alien Snatch release album of the year, it sure feels like old times!