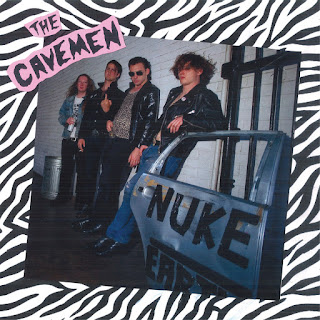 Can you believe I made it through the first three months of 2018 without talking up a single release as a potential album of the year? That is so unlike me! But that all changes today. Nuke Earth, the phenomenal third LP from New Zealand miscreants The Cavemen, is out on Slovenly Recordings. The bar for punk rock albums in 2018 has definitely been set!

This year got off to a great start with singles, but I was still waiting for a full-length record to really make an impression on me. Well Nuke Earth more than made an impression - it just about knocked my head off! This is absolutely the full-force garage-punk rock n' roll kick in the teeth I've been craving. And while that's not particularly surprising given the quality of The Cavemen's prior recorded output, they have really blown me away with this particular batch of songs. The band sounds as savage and scuzzy as ever, with frontman Paul screaming his guts out while his band-mates gleefully pound your eardrums into submission. Kicking off with the storming 1-2 punch of "Lust For Evil" and "Criminal Love", The Cavemen come out raring to flatten anything in their way! They could have padded the rest of the album with xylophone instrumentals and Right Said Fred covers, and it still would have been an essential purchase. But beginning with the third track, "Janey", the album shows off a side of The Cavemen that often goes unappreciated. While still as boisterous and frenzied as a Cavemen tune ought to be, this one is downright catchy! The band's love for '50s rock n' roll really comes through, and you might want to check yourself for a pulse if you're not singing (or more likely screaming) along by the close of the first chorus. This, my friends, is a genuinely great rock n' roll song. So if it hasn't been said before, let it be said now: The Cavemen are damn fine songwriters! And throughout this album, they skillfully mix up musical styles to avoid the "sameness" that can sometimes afflict rowdy punk n' roll records. "Batshit Crazy" brings to mind a '60s garage rock party if it took a highly demented and severely drug-addled turn. "Concrete Town" is punk rock n' roll so dirty and vicious that you'll swear the '90s never ended. "The Night Jimmy Savile Died" comes on with a dirgy, Stooges-like intro, then erupts into a blaze of pounding, maniacal fury. "Elvis Is Alive" sounds like the best song The Replacements left off of Stink. "Don't Wanna Hang" could easily have come out on Rip Off Records in 1995. The psychobilly-ish "Gimme Beer Or Gimme Death" beautifully articulates my primary philosophy of existence.

Aren't most bands supposed to be in their "mature" phase by the time they make their third album? Thank god that's not the case with The Cavemen! In terms of ferocity and pure wild fun, Nuke Earth is right there with its two predecessors. If this release doesn't immediately compel you to engage in dangerous and possibly illegal activities, you probably need to turn up the volume louder. But The Cavemen have far more going for them than just unsavory reputations and an unquenchable thirst for mayhem. They have songs too. Nuke Earth is all hits and no shit! Avoid at all costs if you can't handle some real rock n' roll!