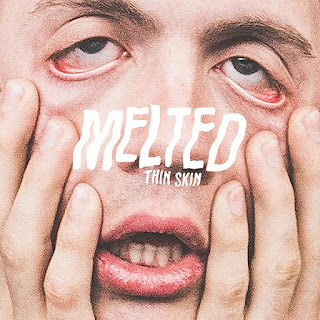 Hailing from Long Beach, Melted takes me back to the 1990s heyday of Southern Californian melodic punk. That sub-genre has always been hit or miss for me, but in the case of Melted it definitely hits! The trio's new album Thin Skin is a co-release between the legendary Stardumb Records and four other labels (Programme Sounds, Open Door Records, Celebrity Punkhouse, and Astro Lizard Records). This is a different kind of release for Stardumb. It reminds me of something I would have mail-ordered from Dr. Strange Records in 1994! The band's sound is catchy and energetic in that familiar SoCal way, but it also packs one hell of a punch. Jonny Bell's stellar production cranks the guitars way up and achieves an ideal mix of aggression and melody. I like that the band's stated influences (e.g. Jawbreaker, Descendents) make sense but aren't entirely obvious from listening to the record. Melted is known for the frenzied energy of its live shows, and that genuinely comes through on the album. I'm envisioning a room full of kids going nuts while the band members frantically jump around and drive themselves to exhaustion. Singer/guitarist Justin Eckley has a somewhat familiar vocal style for this type of band, but it's the conviction of his delivery that really stands out. He absolutely pours his heart into every song - always saving a little extra for that climactic sing-along moment.

One thing that works so well for Thin Skin is that Melted is really adept at switching things up. Songs like "Most Days" and "Alright" are textbook SoCal pop-core, but then these guys can turn around and absolutely rock your face off ("Stay Away", "Thin Skin"). And then on a slower song like "Low", the band even shows some Weezer-ish qualities. I would cite "Low" as one of the standout tracks on the record.

Thin Skin was an album several years in the making, and it successfully highlights Melted's songwriting maturation while still kicking a whole lot of ass. Stardumb will be sending the band to Europe for a tour later this year. Given the well-documented enthusiasm of European crowds, I'd say those shows are gonna be a blast!

Email ThisBlogThis!Share to TwitterShare to FacebookShare to Pinterest
Labels: Stardumb