New album from Tom Baker and the Snakes! 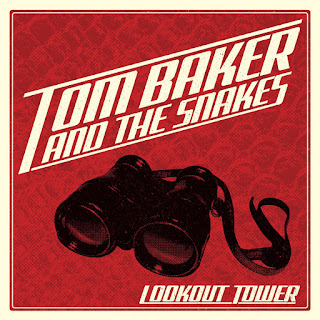 Damn, has Rum Bar Records ever been serving up the rock this month! You might need to invest in louder speakers! Hot on the heels of that amazing new Bullet Proof Lovers album, Malibu Lou unleashes the eagerly awaited new LP from Tom Baker and the Snakes. Singer/guitarist Baker (Nana, the Dirty Truckers) is a fixture of the Boston garage/rock n' roll scene. He's backed by a formidable unit of veteran players including John Brookhouse (Worshipper, The Dirty Truckers) on lead guitar, Charles Hansen (Rock Bottom) on guitar, John Sheeran (Spitzz, Township) on bass, and Johnny Blout (Watts) on drums. Do the math, and you realize that's three guitars in this band. And none of 'em go to waste! Lookout Tower is the new album, and it delivers 11 shots of Stones/Faces inspired rock n' roll with a palpable heartland of America feel. The album imbues '70s arena rock wallop with the ragged underdog spirit of bands like The Replacements. That Westerberg/Stinson worship really shows through on signature tunes like the rough-around-the-edges pop gem "Doll Eyes" and the late night dive-bar banger "High n' Tight". Both were standout tracks on the band's digital-only 4 Stars EP from last year, and it would have been criminal to have kept them off the album. But there's plenty more to like here, from the meat & potatoes rocker "Gotta Find Her" to the '90s college radio jangle of "Needle in the Red" to the rootsy ballad "Say Goodbye" (which sounds like something Soul Asylum could have done in its prime). "Bad Change" hovers at the intersection of big hook power pop and boozy rock n' roll - an especially sweet spot for this band. And "Satisfied Fool" takes me straight back to the late '80s of my youth when I was seemingly listening to album-oriented rock radio 24/7.

Tom Baker and the Snakes are a perfect fit on the Rum Bar roster- filling the space between the '70s FM thunder of Watts and the earnest blue collar rock n' roll of Nato Coles. If you like a whole lot of guitar in your rock n' roll (and really, who doesn't?!), Lookout Tower will have you in rock-out heaven. Beyond that, the quality and depth of Baker's songwriting is not to be overlooked. Arriving at the beginning of spring, Lookout Tower is for sure an album you'll want to crank loud as you relax on the porch and enjoy a cold beverage straight from the can. This, my friends, is real deal Boston rock n' roll!