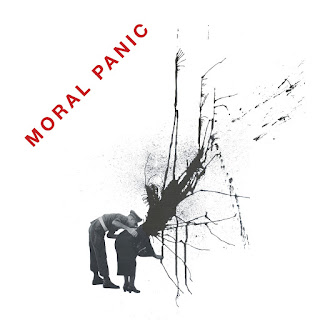 The almighty Livids, while one of the most exciting punk rock n' roll bands of recent memory, proved to be a sadly short-lived outfit. So it's fantastic news that Livids guitarist Daniel Kelley and drummer Gregory Collins have formed a red-hot new band with bassist Mark Brei. The new group is called Moral Panic. If you liked Livids, you will love Moral Panic. Slovenly Recordings just released the trio's debut album, and the thing totally kills! Don't let the band name fool you into thinking this is some sort of 1980s political hardcore type deal. Instead think '90s breakneck garage punk rock n' roll a la Teengenerate/New Bomb Turks.

I love a band that storms out of the gates in attack mode and never lets up, and that is Moral Panic's m.o. for sure. They tear through 10 songs in 20 blistering minutes, and every second is pure pummeling rock n' roll. "Ripped Jeans" is impossibly catchy for such a wild & manic number, while the scorching "Harbor Fitness" brings to mind Tokyo 1994 via Cleveland 1978. And kudos are in order for a face-smashing rendition of The Nils' "Fountains" that fully bears M.P.'s high velocity signature. Kelley and Collins have picked up right where they left off in Livids. No attempts at refinement or progression have been made. They're bringing it fast and furious, and anything that steps in the path of this steamroller is toast! If you've been depressed for years over the realization that there will never be a Livids full-length, this album will cheer you up right fast. Crank up the volume until the neighbors complain!