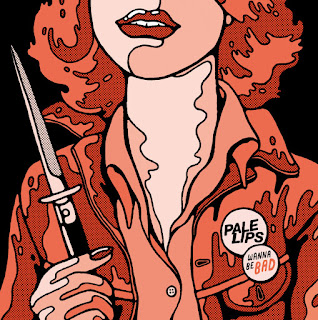 Oh boy! If there was one new album I was most looking forward to hearing in 2016, it was the debut long player from Montreal foursome Pale Lips. Now it has arrived, and it's absolutely as great as I thought it would be!

Wanna Be Bad, out on Hosehead Records in Canada and Resurrection Records in the U.S., is a fully satisfying follow-up to last year's brilliant debut EP Got A Sweet Tooth. Of course I can never get enough of these bands that build their foundation on the dual influence of '60s girl groups and The Ramones. But Pale Lips set themselves apart from a lot of similar acts in the respect that they're a rock n' roll band first and foremost. If you've spent the last 35 years wishing that Nikki and the Corvettes had made a second LP, Wanna Be Bad is the album you've been waiting for!

Kicking off with the relentlessly high-spirited "Doo Wah Diddy Shim Sham Shimmy (Bama Lama Loo)", Wanna Be Bad wastes no time in establishing itself as an album that was made to be enjoyed. Quite literally, this record is non-stop fun! I may have remarked to a few people that "Mary-Lou Sniffin' Glue" is the greatest song ever recorded, and that's only slight hyperbole. "Jangaroo", by all rights, should inspire the #1 dance craze of 2016. If you can imagine a '60s cult movie where a bad-ass girl gang suddenly breaks into song, "Queen of Spades" would be that song. "Romanne" has me picturing an all-female band that could have given Chuck Berry and Little Richard a run for their money. "Rock 'N' Roll Dipshit" immediately merits a spot on a playlist featuring the best songs from Nikki and the Corvettes, BobbyTeens, and early Donnas.

Pale Lips, as I anticipated, have placed themselves in the thick of the album of the year conversation. You will not come across a better combination of infectious sing-along tunes, clever as hell lyrics, and unadulterated youthful energy. It goes without saying that Wanna Be Bad is a mandatory must-buy for any fan of the bubblegum punk/power pop/garage girl group thing. But beyond that, this album is a resounding affirmation that good old rock n' roll is still the music this world needs the most. I urge you to play it at the highest possible volume while you're hanging out with friends, driving with the windows down, engaging in illicit relations, or just dancing around your bedroom for the pure joy of it. If there were any remaining doubts that being bad is a fine thing to aspire to, Pale Lips have laid them to rest.