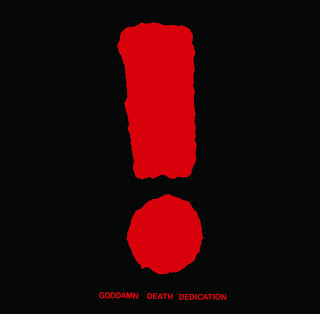 Did you witness the wildness and sheer ecstasy of Chicago Cubs fans celebrating their World Series victory? That would give you an idea of how I behaved when a brand-new Ergs record showed up in my mailbox last week. The neighbors are still looking at me funny.

I must have reviewed The Ergs at least ten times between 2000 and 2007, and I can't think of a band I loved more in that first decade of the millennium. It has now been eight years since the band called it a day, and you could say we have the demise of The Ergs to thank for some of the best music of recent times (Night Birds, Black Wine, solo Mikey Erg). Even so, I'd be lying if I said I haven't missed The Ergs. In conjunction with a reunion show recently performed at The Fest 15, The Ergs got together earlier this year and secretly recorded a new record! It's out on vinyl on Whoa Oh Records – the label that gave us the band's debut 7" and LP way back when. And while I'm happy that Goddamn Death Dedication exists at all, I'm even happier that it's a great Ergs record. You can tell that the guys really took the task of making one last EP seriously (while still refusing to take themselves seriously, which is their ultimate appeal). Each band member brought a top-notch original song to the table, and an avant garde meets noise rock cover of The Knack's "My Sharona" is the sort of rock nerd inside joke that has always endeared this band to me.

Leadoff track "Depot Avenue" is vintage Ergs all the way - amazing pop-punk with a wonderfully wistful/melancholic vocal from Mike and the usual ace guitar work from Jeff. Nobody writes or sings this sort of song better than Mikey Erg - who so convincingly represents every dude who's ever loved and lost. If you wonder how he's found time to amass such extensive relationship experience while also playing in over 400 bands, well that is a mystery that some of our most brilliant physicists have been trying in vain to crack. The Joe-penned "September/October" is hard-driving and catchy as hell- bringing to mind later SST era Husker Du if they'd gone full-on pop-punk. If I were forced to name my favorite track on the record, this would be it. "Everybody loves the new car smell/But I think the lease is up as far as I can tell" is the best lyrical couplet of the year. "Walk Against the Parade" again demonstrates what a fantastic lyricist and hugely underrated songwriter Jeff is. It's such a straight-forward, satisfying punk tune - yet incredibly profound as well. Whether you think of "No Sharona" as a mere exercise in comedy or a true triumph of interpretation, there's no denying that you haven't heard anything like it before. Think turn-of-the-'80s Manhattan no wave meets the screeching rage of Nirvana at its most dissonant - somehow applied to one of the most ubiquitous pop hits that Western civilization has ever known. I consider myself a huge fan "My Sharona" and have even been known to get into fist fights with individuals who think it's amusing to enjoy it "ironically". I can appreciate that The Ergs picked this song for transformation because they realize how awesome it is.

Given how many years it has been since The Ergs disbanded, it's probable that the band would be unknown to at least a small percentage of people who currently follow punk rock. And I really think that if you've never heard The Ergs before, Goddamn Death Dedication is as good of a place as any to start. This is not the work of a once-great band phoning it in just for the sake of delivering product. And although all of these guys have grown immensely as musicians and artists over the years, when they get together they still sound like The Ergs. Hearing the goofy banter at the beginning of "Depot Avenue", I'm taken by how little The Ergs ever changed in spirit from their earliest days. The records got better and crowds got bigger. But to the end, The Ergs were three music geeks playing pop-punk with heart and humor. For all of the fans who've been eagerly awaiting Goddamn Death Dedication for months, I guarantee that you won't be disappointed. It's an A-caliber Ergs release. If this is the last we ever hear from the band, I can't think of a better way to bow out. I can happily tell you that this is not the last Ergs review I'll ever write. More on that in a week or two!

You can order Goddamn Death Dedication via The Ergs' Bandcamp or the Whoa Oh Records web site.  The Whoa Oh web site has the entire label discography available for streaming, so check it out and dig into some of the finest pop-punk records of the last decade and a half!