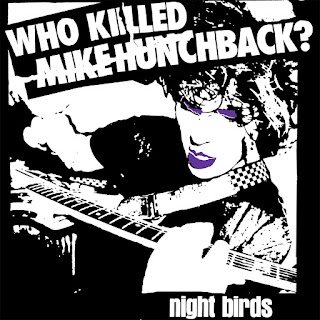 I'm a bit embarrassed that I'm a month late getting to this review. Come on, it's the freaking Night Birds! I would not blame the band for declining to make a donation in my name to The Human Fund this Christmas. But late or not, this post is well worth your attention! If you're a huge fan of Night Birds (and who isn't?!), you really need to get your hands on the band's recently released collection of early demos. Titled Who Killed Mike Hunchback?, this is actually the second in a series of original demos released by Fat Wreck Chords. The obvious point of comparison is the Black Flag '82 Demos bootleg - which a lot of fans consider to be superior to the proper releases those songs would later appear on. And while no one's complaining about how these particular Night Birds songs turned out on record (five of them ended up on the first LP, and "Thrilling Murder" appeared on the band's self-titled 7"), these demos rip so hard that it would have been a shame if they'd never been released! The case could be made for A-side cuts "Demon Haunted World", "One Eye", and "Oblivious" being at least as good as the later studio versions. And it's fascinating to hear former guitarist Mike Hunchback serve as a one-man band on rough demo versions of classic NB tracks "Born Of Man and Woman" and "Thrilling Murder". This release is an incredible treat for fans, who should quickly go about securing one of the 1500 limited copies. Yet if this was somehow your first time hearing Night Birds, you'd immediately appreciate what a ferocious and fantastic band this is. Seriously: hearing these demos takes me back to the very first time I heard Night Birds and how instantly blown away I was. Get Who Killed Mike Hunchback via Night Birds' Bandcamp or directly from Fat Wreck!