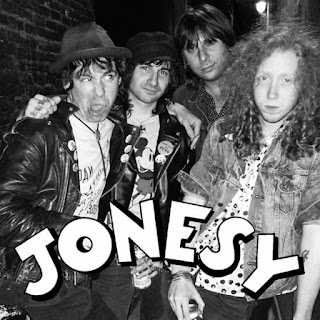 So I recently received a message from Vinny from The Fanatiques and Clean-Cuts - a Frenchman I can always count on to carry the torch for '77 style punk rock. He told me he had a new band going based in Montreal, Canada. Of course I checked the band out and was duly impressed. The group is called Jonesy, and its debut single is out now on the eternally dependable No Front Teeth Records. Essentially Jonesy combines the musical influence of classic '77 punk (Sex Pistols, Heartbreakers, Dead Boys) with lyrics influenced by the likes of GG Allin and The Dwarves. If you're easily offended, you may want to steer clear! But if you enjoy the sleazy side of '70s punk rock n' roll and can appreciate the humor/shock factor of blatantly distasteful lyrics, I think you're really gonna love this band! The Steve Jones/Cheetah Chrome style guitar work is absolutely ripping, and these songs totally lend themselves to singing along (although you may feel the need to take a shower afterwards!). I am very interested in finding out what Jonesy has in store for us on future releases. Will they get their minds out of the gutter? Do we even want them to? Another winning release from No Front Teeth!