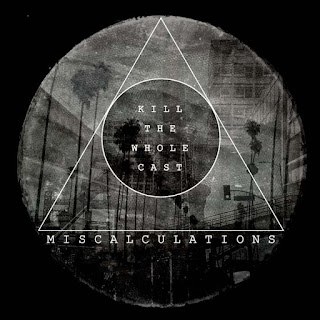 They've done it again! Miscalculations are the brainchild of Shaun Clark and Marco Palumbo Rodriges - now joined by Mauro Venegas (guitar) and Robert Persson (bass). The London outfit is setting a new standard for post-modern punk music, and now we have the second brilliant album this year from Miscalculations! Kill The Whole Cast is the band's third album overall. The title makes it clear that this group has not suddenly decided to start writing songs about pretty girls and milkshakes - unless those pretty girls are secretly cyborg assassins and the milkshakes are laced with chemicals that could drive a man to madness. I'm really impressed that Miscalculations have managed to be this prolific yet still top themselves with every new release. And while the band's sound continues to evolve, it remains firmly rooted in late '70s U.K. punk and post-punk. If you're looking for the best qualities of Wire, the Buzzcocks, Joy Division, Gary Numan, The Screamers, 2000s Stitches, The Vicious, and Masshysteri combined into one band, Miscalculations are exactly that.

Kill The Whole Cast, like its two predecessors, is like sci-fi noir cinema set to music - evoking visions of cold concrete urban wastelands and the unmentionable horrors lurking around every corner. Miscalculations' music remains the stuff of contradictions: abrasive yet overtly melodic, bleak yet highly addictive, horrifying yet beautifully poetic. For the most part, these songs sound like vintage Miscalculations. Tracks like "The Worst Possible Advice", "Broken Skin", and "Organ Donor" walk a fine line between '77 punk and dark new wave. You'll be whistling those melodies to yourself before the disturbing nature of the lyrics completely sinks in! Elsewhere, the band dives fully into synth-pop territory with creepy numbers like "The Same Needle", "Metamorphosis", and the pitch-black "Born Blind".

Miscalculations continue to be the rare post-punk band that's just as much "punk" as it is "post". They've managed to build on their original vision without losing the plot, and clearly they've been on a creative hot streak that has allowed them to generate all of this fantastic music in such a short period of time. Kill The Whole Cast is the band's best album yet - and certainly a fine place to start if you don't yet own anything by Miscalculations. From now until the end of December, it's a free download over at the group's Bandcamp!