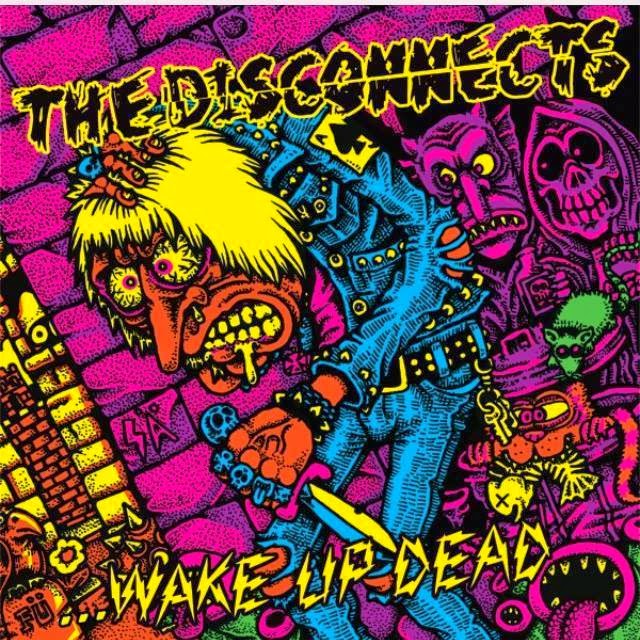 Now this is what I've been jonesing for! The pride of Neptune City, New Jersey, The Disconnects have finally released a proper album after a couple of EPs and a highly acclaimed debut tape. It's no secret that out of all the types of music I write about, the '77 punk stuff is the closest to my heart. And The Disconnects capture a sound I've been waiting a while to hear from a newer band: gritty, street-tough punk rock n' roll in the style of the Dead Boys, Heartbreakers, and Ramones. ...Wake Up Dead - available in the States from Baldy Longhair Records and in Europe from Glunk Records - had me jumping up and down and screaming in delight from the opening strains of leadoff scorcher "Demolition Heart". This is how you do it, man: snotty vocals, slashing guitars, and attitude oozing from every note! Being someone who's loved this kind of music for a long time, I am super thrilled any time a newer band comes along and gives it a youthful kick in the pants. Young, loud, and snotty is almost always a winning recipe, and The Disconnects pull it off with ferocity and conviction. While it may not be physically possible to time travel back to 1970s New York City and hang out with Stiv Bators, Johnny Thunders, and Dee Dee Ramone, listening to this album is the next best thing!

The advantage of waiting a few years to get a debut album out is that it really gives a band time to hone its songwriting chops and develop its sound. The Disconnects, at this point, are completely on top of their game. What impresses me about ...Wake Up Dead is its nice mix of song styles. Harder, faster tracks like "Sick! Sick! Sick!" and "She's A Fink" sound straight out of 1977. But these guys also show an ability to slow it down and focus on their melodic side. The brilliant "Lonely Boy" sounds kinda like Johnny Thunders fronting The Undertones, while "I Don't Mind" is a dead ringer for an early Replacements ballad. And I like that the album is sequenced to highlight the variety of its material. For example, the sonic fireballs "Makes Me Wanna Kill" and "No Life Like The Low Life" are sandwiched by the downright pretty "For Mindy". There are 13 great tracks here, and none of them feel unnecessary.

It's been a full decade already since Red Invasion's I'm Not Too Young To Die set the modern standard for Dead Boys/Thunders inspired punk n' roll sleaze. I've pretty much been waiting ever since then for another band to come along and top it. And that's exactly what The Disconnects have done with ...Wake Up Dead. Hearing any band revive the timeless sounds of American '77 punk always makes me a happy dude. But to hear a band that's this good at it totally gives me goosebumps! Rather than fashion a pale imitation of yesteryear's greats, The Disconnects have taken these classic inspirations and made them feel urgent and fresh in 2015. ...Wake Up Dead is liable to change the minds of a few stubborn souls who refuse to believe that great punk rock is still being made today. And it's certain to turn some younger fans on to some amazing music from the past. That, my friends, is what we call a win-win!