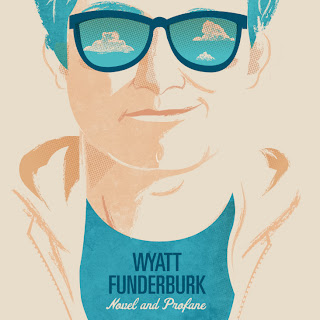 After a long career playing in wonderful bands like Second Saturday and producing the likes of Kurt Baker, Wyatt Funderburk has finally gotten around to making a solo album. And all I can say is wow! Not that it's a huge surprise considering the man's track record, but Novel and Profane is pure pop perfection from start to finish. Funderburk is an amazing songwriter with a warm, likable singing voice. And on this album, he combines so many different things I like into a singular vision of pop that is so distinctively him. Touchstones include '90s alternapop (Superdrag, Jellyfish, Fountains of Wayne), '70s AM gold, Beatles/Beach Boys classicism, and of course the productions of Jeff Lynne. But ultimately this album bears Funderburk's signature. He seamlessly mixes the old and the new and proves to be an adept storyteller. His melodies aren't just catchy - they're positively beautiful. And he's crafted an album so pleasant and engaging that I'd like to play it on repeat all day long. Even when the songs aren't exactly upbeat, Novel and Profane is like musical comfort food. I'm always sad when it comes to an end.

As always, Funderburk's recording style hearkens back to the glory days of pop/rock. There's no trickery or excess involved - just simple, high quality production that allows the words and melodies to speak for themselves. The vocal harmonies are beautifully recorded but never overdone, and it's the songs themselves that play the starring role. It's really hard to pick a standout track since the tunes are so consistently great. And the variety of the material is highly impressive. Novel and Profane delivers everything from crunching modern rock ("Mandolin") to gorgeous minor key pop ("You Know What To Do", "North On 65") to epic ballads ("Nights Like This") to breezy country rock ("Feeling Good Tonight") to spot-on Tom Petty worship ("Love Will Lead The Way") - and none of it falters. And I love how Funderburk succeeds with songs that would perhaps come off as cheesy in the hands of a lesser artist. "Try To Be" would not have sounded out of place at a high school homecoming dance in 1988. And superb closing track "If I Ever Wanted Easier" is the kind of high soaring love song that used to thrive in more innocent times. It sounds like it should be playing over the closing credits of a cinematic love story that ends happily after countless trials and tribulations. Even the most unsentimental individuals will find themselves pumping their fists when that chorus comes in, believing wholeheartedly that love can prevail over any obstacle. If you enjoyed Kurt Baker's Brand New Beat (an album Funderburk produced and co-wrote), this song will strike a familiar chord.

Combining numerous references to the musical past with a decidedly contemporary sheen, Novel and Profane is an album for music lovers of all ages and stylistic preferences. At a time when most new music seems so meticulously targeted at niche demographics, it's refreshing to hear an artist who simply wants to write great songs that people can relate to. If I wanted to get the melody to "Summer" out of my head, I'd probably have to contact a doctor and have it surgically removed. But, you know, I'd rather not.