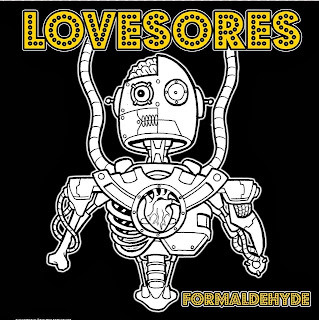 Holy crap - the Lovesores have made another record! And if that news doesn't excite you, I really gotta wonder about you! The last time we heard from the Lovesores, I proclaimed the band's Bubblegum Riot ten-inch to be as good as any record that Scott "Deluxe" Drake and Jeff Fieldhouse had ever played on. And I wasn't the only person saying that! If they'd followed it up with another record even half as good, I would have been plenty happy. But they've done far better than that - new EP Formaldehyde picks up where Bubblegum Riot left off, and the "Mick and Keith of punk rock" are still throwing fire like the last 20 years never happened! The blistering title track can be added to the growing list of Lovesores' signature anthems. Drake's vocals are so ferocious and virulent that you'd swear he's holding the secret to eternal youth, and those guitars slash and burn like nobody's business. If you like filthy and furious punk rock n' roll, "Formaldehyde" needs to be on your iPod tonight! You could play this track for almost anyone and successfully pass it off as a long lost punk rock classic from 1977 (or 1993, same difference). Again, the rest of the band (Boz Bennes, Adam Kattau, and Alex Fast) proves to be as formidable of a supporting cast as Drake and Fieldhouse have ever worked with (Damn - listen to those drums!). And stylistically, these two living legends continue to tear into the musical formula they helped define - demonstrating that they're still the best in the business. Accept no imitations! Grab a strong drink with one hand, crank up the volume with the other, and enjoy these killer tunes in all their degenerate glory. Can't wait for an LP!