Return of The Sensibles! 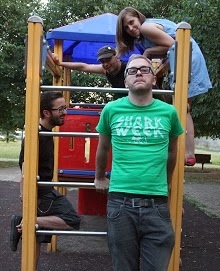 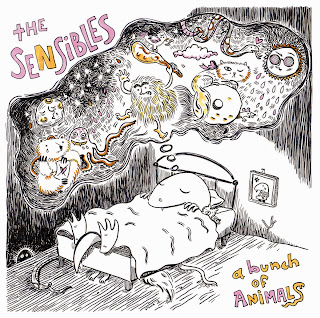 Like one of those giant, one-ounce straws of Pixy Stix chased with a double shot of Espresso, the new Sensibles album hits you with enough energy and over the top sweetness to ensure that you'll be smiling for hours. Put this record on, and you cannot have a bad day!

I instantly fell in love with Milan's Sensibles after hearing their last EP, and my only concern with the arrival of a full album was that they'd mess with a winning formula. So did they? Not even a little! The Sensibles have chosen to perfect the recipe rather than alter it, and this time it's all the sugar and twice the caffeine! From the opening strains of the accurately-titled "Happy", A Bunch of Animals is a joyful and upbeat affair full of infectious melodies and endearingly bubbly vocals from lead singer Stella. And while a lot of bands of this style can string together three or four quality tracks, The Sensibles have proven talented enough to fill an entire album with insanely catchy pop songs. Recorded at T.U.P. Studio with the great Bruno Barcella producing, A Bunch of Animals attains that perfect mix of bubblegum pop and buzzsaw punk that countless bands aim for but too often fail to achieve. I wholeheartedly recommend the album to any individual aged 1-100 who enjoys music that makes you wanna jump around and sing along exuberantly. It's just so much fun!

If there's anything "different" about this Sensibles record in relation to the last one, it's that the band has really found its unique voice within the familiar powerpop/punk style. No doubt, I still hear echoes of certain classic bands (Buzzcocks, Shonen Knife, early Muffs). But at this point, The Sensibles just sound like The Sensibles! A Bunch of Animals takes the boundless energy of the band's self-titled EP and sustains it for a full album, with none of the 12 tracks exceeding three minutes and only two surpassing two and a half. It's truly a dizzying succession of feelgood hooks and indelible choruses, and that can never be a bad thing in my book! There's not a single song here that wouldn't have been a standout on an EP. Every time you think you've finally heard "the hit", the next track comes along and makes you reconsider. From the gorgeously wistful "My Mattress" to the ultra exhilarating "I'm A Brat" to the impossibly adorable "Kitten Blues", the material is consistently engaging and varied enough to keep things fresh. The Sensibles do more than just entertain you. They totally win you over! After you hear this record, you'll want to hang out with The Sensibles. You'll want to cook them breakfast and buy them gifts for Christmas. You'll want a tattoo of their logo on your left calf. I've been a pop-punk fan for a very long time, and I'd say this album is a potential classic of the genre. Listen and love!