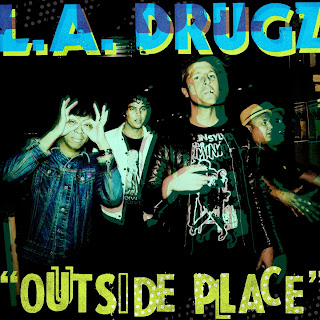 Woo-hoo! The debut 12" from L.A. Drugz has arrived, and it has totally made my year! The first time I played it, my jaw dropped so far that I required minor facial surgery. What kind of crazy times are we living in when a band can create music of this caliber and not make the cover of Rolling Stone or at least Tiger Beat? And why did my local radio D.J. rudely hang up on me last night when I called and asked him to play "Marina"? Shouldn't a man of his occupation be keeping up with all the hot new tunes? I raved about a few of these tracks earlier this year, and I consequently built up expectations for the band's debut EP that were going to be very hard to meet. But this is L.A. Drugz, man! They didn't just meet my expectations - they exceeded them! I will not reveal my selection for album of the year for a few more weeks. But I'll gladly tell you that Outside Place is my favorite overall release of 2013.

L.A. Drugz is the latest band from Justin Maurer of Clorox Girls fame. With James Carman from Maniac and Images, Cezar Mora from Bad Machine, and Johnny "JD" Reyes (ex Images and Bad Machine) joining him in the lineup, this is somewhat of a punk/powerpop super group. And the word "super" is right! I would not be surprised to hear that these dudes wear capes (because, you know, they're quite fashionable). I did not review the Clorox Girls as many times as I should have when I was doing Now Wave Magazine. It's one of my greatest regrets in life, right up there with voting for Ralph Nader and declining a date with Susie Kitzenbaumer because she wanted to go see Forrest Gump. My penance will include a 5,000 word retro review of J'aime Les Filles and continuing coverage of Maurer's current musical projects. L.A. Drugz in particular hit my sweet spot with their right-on blend of classic power pop and melodic '70s style punk. There are some obvious similarities to the Clorox Girls, but with considerably more '60s pop influence in the songwriting and vocal harmonizing. The title track is a knockout punch of Ramones/Buzzcocks/Dickies goodness that has me bouncing off the walls. If I had heard it when I was 26, I would have gone out that very day and gotten an L.A. Drugz tattoo! The hauntingly infectious "Vampire" could pass for a lost Clorox Girls track, while "All The Time" is as close as you can get to mid-'70s California without a time machine and a new hairdo. "Ooh Ooh Ooh", which sounds like a missing track off the Rhino Shake It Up! compilation, would probably be the "hit" if it weren't up against the sheer pop perfection of "Marina". Maurer is the primary songwriter here, while Mora is responsible for all those catchy guitar leads. And Carman, the Clem Burke of his generation, is the band's secret weapon. He excels on backing vocals, and his drumming style is perfect for this kind of music. I don't think it's a coincidence that every band he plays in is awesome!

In my previous write-up on L.A. Drugz, I predicted that they'd be my favorite band by year's end. I can't say I was wrong about that! This group is the perfect combination of all the things I love in music. They are modern day heirs to L.A. power pop greats like The Knack and The Nerves, yet they also mix in that classic punk style that I can never get enough of. Whether you're talking about a hook worthy of a K-tel commercial ("Ooh Ooh Ooh") or a melody destined to be stuck in your head all day ("Marina"), Maurer knows what it takes to craft a great pop song. In addition, he and his band mates really nail crucial touches such as the harmonies and guitar solos. And let's not overlook the simple fact that this record sounds great. It was produced by the band at the home studio of "Kid" Kevin Carle (ex Clorox Girls) and mastered by Red Dons' bassist Hadji Husayn at North London Bomb Factory. The result is a warm analog sound with plenty of punch - the kind of recording that always sounds amazing on vinyl! And while it's perfectly natural to speculate on what kind of album L.A. Drugz might be capable of making, there's something about the extended play format that really seems suited to power pop. With only six songs on the record, you're getting less quantity but way more quality. No doubt about it, every track could have been an A-side. All killer, no filler: if that's not the American way, it sure should be!

Great record. I listened to "All the Time" for like a week on repeat.