Retro Reviews: The Many Moods Of The Vindictives 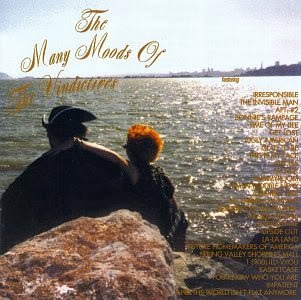 I often talk about the '90s being the second golden age of punk rock. If I ever got around to doing it, I could fill multiple volumes of books with write-ups on all the great punk bands of the '90s. It was a wonderful time to be a young writer coming up in the punk world. And all these years later, those bands and their music still hold up incredibly well. A few of the great bands of that time received the acclaim they justly deserved. Others toiled in obscurity and were totally overlooked. In between were the bands who got some recognition, but should have been way bigger. I'd put The Vindictives in that latter category. Signing to Lookout! Records at the height of the label's popularity, the Chicago band didn't exactly go unnoticed. But I've always maintained that most people failed to grasp just how incredible The Vindictives were in their prime. They were, to my mind, criminally underrated. They shoulda been huge. If I had to make a list of the ten greatest punk bands of the '90s, that would be really, really hard. But for sure, The Vindictives would have to be on that list.

If you weren't particularly paying attention, you might have dismissed The Vindictives as a typical '90s pop-punk band. But while they were definitely in the top tier of bands to be associated with that whole scene, there was nothing even remotely "typical" about The Vindictives. Sure, they had the melodic sensibility and unassailable Ramones influence of their well-known peers. But they were an incredibly unique band - creating manic and neurotic punk music full of fiercely intelligent ruminations on alienation, madness, and the general hollowness of respectable society. While the band's contemporaries mostly waxed pathetic on love and infatuation, The Vindictives tackled far more troubling subject matter with smarts and humor. With his deranged, snot-nosed vocals, Joey Vindictive would have been a distinctive artist even if he hadn't written such brilliant & bizarre lyrics. I'd put him up there with the greatest punk rock singers.

I can still remember where I was the first time I heard The Vindictives: sitting in my bedroom by the turntable, delighted and completely stunned by what I'd just heard. I thought to myself, "Holy shit, that guy's nuts...and I love it!" Rocks In My Head, the band's first EP for Lookout!, was one of a handful of recordings that propelled me into a "career" of writing about punk music. I yearned for much more, and Lookout! came through in 1995 with The Many Moods Of The Vindictives, a deluxe 28-song collection of the band's recorded output circa 1991-93 (their first six EPs plus a few comp cuts). While the band did release several more EPs in between 1994 and 1996, I always reach for The Many Moods Of... when I want to hear "vintage" Vindictives. Rather than make the mistake of trying to re-record their classic 7" tracks for a "proper" studio album, the band simply remixed and re-released all the original recordings. The result was one of the best punk albums of its time. Compared to a lot of stuff that I raved about back then, it stands the test of time way better. I consider The Vindictives to be not just one of the greatest punk bands of the early '90s, but also one of the greatest punk bands ever. That may sound like hyperbole, but the proof is in the pudding. How often do you hear a 28-song compilaton that isn't at least half garbage? The Many Moods Of... is almost all gold and features legendary tracks like "...And The World Isn't Flat Anymore", "Ugly American", "The Terrible Monster", "I Know People", "The Invisible Man", "I'm Sick", and "Circles". I fondly remember listening to it multiple times a day for weeks on end. And when I put it on today, I don't have to wonder why I loved it so much. It still kills.

The Vindictives called it a day in 1996 due to a serious health crisis that threatened Joey's life. The band would eventually re-unite and in 1999 released the wildly inventive concept album Hypno-Punko, which may have been too "out there" for fans who were expecting the same old Vindictives. After a handful releases in the early 2000s, the band was largely inactive until the release of last December's mono-flexi EP. The band is currently working on a new full-length album which will surely be great. I wholeheartedly recommend any and every thing The Vindictives have ever put their name on (their rendition of Leave Home was by far my favorite of the Ramones covers LPs). But The Many Moods Of The Vindictives is definitely where you'll want to start if you are currently unfamiliar with this incredible band. It's jam-packed with classic songs and primarily features the vintage Vindictives lineup of P.J. Parti on drums and Billy Blastoff on guitar joining Joey on vocals, Johnny Personality on bass, and the late Dr. Bob on guitar. If you've written off The Vindictives as a mere footnote of '90s pop-punk, check these clips below and prepare to be turned to the dark side!

One of the greatest punk bands ever, Many Moods is perfect.

Awesome!
Could you send me an email when you get a chance? Got some records to send you!
Cheers!