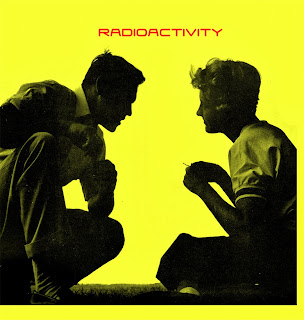 Within the first 20 seconds of Radioactivity's superb debut album, you might conclude that the Marked Men have gotten back together. Well, not quite! But Radioactivity is probably the next best thing. This group is a continuation of The Novice- the band Jeff Burke had going while he was living in Japan. Out of respect for his Novice band mates, Burke has changed the name of the group now that he's assembled a new lineup stateside with the likes of Mark Ryan and Gregory Rutherford on board. But musically, it's in the same style as The Novice. And some of the tracks on the album were originally Novice songs. Any way you shake it, you know what you're getting with Jeff Burke. So it's no surprise that the LP is full of songs in his signature buzzsaw pop style, and that they're predominantly short and fast and catchy as can be. I love that no matter how many times Jeff Burke plays on this kind of record, it's never any less thrilling to hear. He always finds new ways to keep the formula from getting stagnant, and it doesn't hurt that he writes consistently incredible songs. And when Burke does slow the tempos a little, you can hear him gravitating towards more of a pure power pop type sound. As you would expect, I've got no complaints about that!

Racing out of the gates, "Sickness" is vintage Jeff Burke goodness. It sets a tone that Burke, Ryan, and company enthusiastically maintain, powering through frenetic and supremely hooky tracks like "Other Life" and "World of Pleasure". And while there are plenty more awesome songs in the same vein ("When I'm Gone", "What You Want"), the variations from the formula are what ultimately distinguish Radioactivity from the Marked Men. The subtle Buzzcocks echoes of Burke's early songwriting become more obvious on bittersweet gems like "Alright" and "Don't Try". And towards the end, the album takes on somewhat of a stylistic shift. "The Last" and "Alone" completely abandon the frantic rush of the earlier cuts in favor of a mellowed-out, more sophisticated approach to power pop. And closing cut "Trusted You" is the kind of aching love song you might have heard on the radio at the dawn of the 1980s. But even with the evident "growth" in craftsmanship, the hooks are every bit as satisfying. In the end, you get an album that is very much typical of Jeff Burke - yet evolved enough to suggest that he's still progressing as an artist. He may have left Japan behind, but the influence of Japanese power pop continues to color his work.

In a year full of so many highly anticipated releases, Radioactivity's debut album kind of fell under my radar for a while. I knew it would be good, but I wasn't quite expecting it to be this good! It now holds the #2 position on my album of the year list. Every track is really good, and most are exceptional. With a second Radioactivity already on the way, I can't wait to hear what this band has in store for us next!