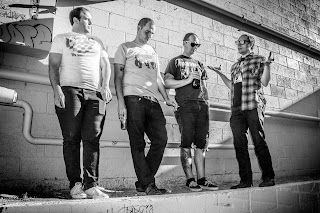 Another new year, and another great release from Dirtnap Records! It's the only thing as certain as death and taxes! Las Cruces, New Mexico's Low Culture is Chris from Shang-A-Lang along with Joe from Shang-A-Lang/Marked Men and Sam and Cade from Total Jock. With Mark Ryan in the producer's chair, it's no big surprise that the band's debut album is quite typical of Dirtnap's recent output. And by "typical", I mean it rules!

Low Culture isn't exactly reinventing the wheel - which is precisely what I like about this band. Their focus is more on writing catchy songs and playing them with gusto than it is on breaking new ground. They've got the "classic" Dirtnap sound all the way: fast, poppy punk with just the right amount of garage grit to it. I also hear a touch of old school Minneapolis punk a la labelmates Legendary Wings and the (late, great) Ergs. Consciously moving away from the "blown out" production of their previous bands, these guys endeavored to make a record with "more emphasis on melody and crisp (while not necessarily 'over-produced') recordings". Screens, while certain to appeal to fans of Shang-A-Lang and Marked Men, does take things to a poppier level. Needless to say, I've got no objections to that!

Screens wastes little time setting a tone. The title track kicks things off with a thrilling jolt of speed and melody, and it's over way before you want it to be. When "I Feel Your Ghost" fires in a similar vein, you might conclude that this is going to be one of those records where every song sounds the same. And even then, that would not necessarily be a bad thing! But truthfully, Low Culture are far from one dimensional. And while the energy and catchiness never let up, these fellas do switch things up in nice, subtle ways. "Trying To Quit" eases the pace a tad and explodes with hooks. "Nightmare" bounces back and forth between a super-fast, almost hardcore attack and a slower, moody feel. The slightly noisy "Touchy Feely" has me recalling the days when college radio didn't suck. And "Magical Thinking", while not drastically altering the formula, proves that Low Culture's approach to music doesn't necessarily run out of steam when you double the length of the songs.

Given the consistent excellence of Dirtnap's full-length issues, some may find themselves taking a release like Screens for granted. But I'm not about to sleep on this gem from the great Southwest. I'd rate this somewhere in the top 80 percent of all Dirtnap LPs, and with great pleasure I declare it an early contender for Album of the Year. Whether you're talking the perfect pop of "California" or the whiplash rush of "Modern World", Low Culture's songcraft is remarkably evolved for a band barely a year into its existence. And Ryan's production indeed finds that happy medium between scuzzy and overpolished. With its boundless pep and abundant infectious melodies, this is one of those albums that will make you grateful for the "repeat" button.