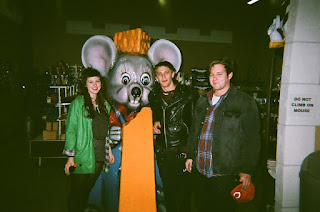 Cincinnati's Tweens have become one of my top bands to watch in 2013, and they've done so on the strength of just one song! Last year the trio digitially released a recording of their debut live performance, and now they're back with a studio track that has knocked my socks off! For reals! I am literally barefoot as I type this!

The name of the song is "Be Mean", and really it's everything I like in music. It's garagey. It's poppy. It's catchy and exuberant. If the live recording merely suggested the considerable potential of the band's punkified doo-wop and girl group angle, "Be Mean" signals Tweens' ascent into the realm of pure awesomeness. This tune is a little more straight-ahead punk rock than the live stuff was. The keen-eared Greg Mongroll is reminded of M.O.T.O. meets Young People With Faces. High praise! I'm inclined to agree if you throw in a little Bobbyteens and early Muffs as well! If these three can continue to write songs at this level, they've got quite a bright future in front of them. They've already got the attitude and enthusiasm to go far, and their catchy lo-fi style is my cup of tea for sure. I look forward to hearing more, and in the meantime you all should be putting "Be Mean" on your next mix! Great tune!