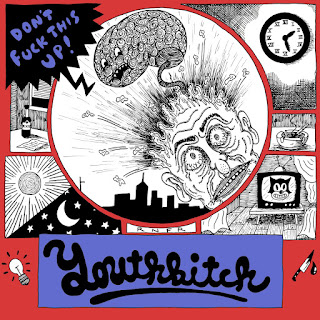 I can't decide if Youthbitch is the worst band name ever - or the absolute greatest! Either way, this young foursome from Portland has made one of the year's best LPs. These fellas take a few of my fave musical styles - power pop, garage, and pop-punk - and mash 'em all together into a raw and energetic hodgepodge of awesomeness. Out on the venerable Jonny Cat Records, Don't Fuck This Up! arrives just a few months after the release of the band's debut long player. But considering the improvement/development between the two albums, you'd think it had been several years. Youthbitch have made the jump from "promising" to "freaking awesome", and I'm seriously thinking that Don't Fuck This Up! might be a darkhorse contender for album of the year. But, thankfully, that doesn't mean that they've "cleaned" up their sound. They've merely solidified it. Compared to the typically polished bands of today's punk/powerpop, Youthbitch are still rough around the edges in all the best ways. And even though they're working in a highly familiar genre of music, they don't "sound like" any other band. It takes a unique bunch of dudes to write songs about wanting to die on the toilet and craft near five-minute epics exploring the need to vomit. If you're looking for some catchy poppy punk that's not straight off the cookie cutter, Youthbitch should be right up your alley!

Don't Fuck This Up! has its obvious "hits", of course. The hyper "Heart Attack" and the mid-tempo jam "The Kids Don't Dance" are no-brainer picks to click. And "Just Like Elvis" puts the band's bizarre sense of humor and spazzy disposition on brilliant display. But truly I like every song on the record, with styles ranging from the garagey rock n' roll of "Bad Mood Tonight" to the genius pop-punk stupidity of "Juvenile Delinquent" (I dare you to resist singing along!). There are times when they slow things down a little, but for the most part they just let it rip and have a whole lot of fun. As song titles like "Baby, I'm An Asshole" and "Bitchmouth" might indicate, these guys are not quite the in-touch-with-their-feelings type of pop-punkers. And thank God for that! Don't Fuck This Up! is idiotic and juvenile - and I mean that as high praise! We've already got enough bands in the world trying to make "statements" or break new ground. Youthbitch bring the hooks all day long, and they're a blast to listen to. What's not to love?!

If I remember correctly, the name is supposedly one of the obscenities the censors thought they heard in "Louie Louie"...

Again you got me hooked Mr. Rutledge, now I am out to buy not only the whole YOUTHBITCH outout but also the latest Jonny Cat Releases.
Save me a Sandwich when my Bank Account will be closed.

Thanks for the tip!

I just listened to the whole thing, I really like the vocals and drums!