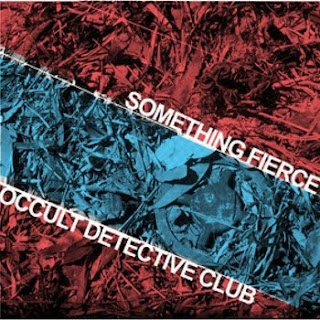 Aw, man: splits. They seem like such a fantastic idea on paper. Two bands for the price of one! How can it possibly lose? But in a lot of cases, splits end up disappointing. Usually it's because you like the one band way more than the other and wish they had contributed all of the songs instead of just half. And another common problem with splits is that the two bands just don't "go" together. How many times have you heard a split where there was just no logical reason for the two bands to be on the same record besides the fact that they were friends with each other? I hate when that happens! But leave it to Dirtnap Records to show the world how to do a split! Out now is a limited edition split 10-inch featuring Dirtnap's own Something Fierce and fellow Texans Occult Detective Club (only 1,000 copies pressed!). Not only does the split commemorate the bands' 2012 joint tour (which hits Portland, Seattle, and Vancouver this weekend), but it also makes a great pairing from a musical standpoint. These two go together like peanut butter and jelly! Or is it chocolate and peanut butter? It's no big secret that Something Fierce is my favorite present-day band. And having finally heard Occult Detective Club, I have to ask - How did I not already know about these guys?! They're totally up my alley and have two albums out. I get a big fat "F" for missing the boat. Oh well. I guess these things happen when you "retire" for three-and-a-half years.

Something Fierce's half of the split consists of three brand-new tracks, which pick up where Don't Be So Cruel left off and advance the ball even further down the field. What I love about this band is that they've reached the point where they only sound like themselves. You hear any of these three songs, and right away you know it's Something Fierce. They've retained the pop sensibility they've always been known for yet have genuinely managed to "progress" as artists. And that is not an easy thing to do! The musical synergy between Steven Garcia on guitar and Niki Sevven on bass, such an enjoyable aspect of Don't Be So Cruel, has been taken to another level. I mean, how often in punk music do you find yourself actually looking forward to the instrumental parts of a song? When it comes to Something Fierce, it's actually what I look forward to the most! The cliche about power trios is that they're supposed to be "tight". Something Fierce, with outstanding drummer Andrew Keith holding the beats, are as tight as it gets. They've been saddled with Clash comparisons all these years, but at this point they're more like a poppy Gang of Four or a post-modern Ruts, demonstrating that you can be really good at playing your instruments and still be "punk". And God, those hooks! We can throw around buzz words like "post-punk" and "new wave" if we want, but too often those terms suggest a formulaic type sound. Something Fierce are doing their own thing entirely, based on their distinct talents. If songs like "Get On Or Get Off" are any indication, their next album will be their best one yet!

Denton's Occult Detective Club contribute four tracks to the split. And I must admit that I like their half of the record just as much as the Something Fierce half. They play an aggressive style of melodic punk with gruff vocals and catchy guitar leads. The songs are short and simple but come off with great power and heart. Killer stuff! Think '70s punk meets early Husker Du with a modern twist. I fucking love these guys! A little four song taste of O.D.C. makes me want to hear a lot more. You can be assured I'm going to check out both of their albums pronto! And in the end, isn't discovering new bands one of the best things about splits? Damn right! Texas delivers again!

Saw Something Fierce and ODC in Seattle on Saturday. Both bands were fucking great. As good as the slower Clash-like Something Fierce songs from the last LP and this split are...they really come alive with a lot more intensity when they play them live.