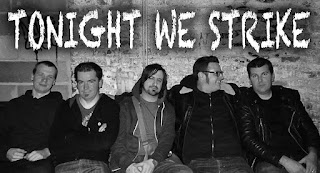 Spending as much time as I do on Facebook, I see a lot of talk about Kickstarter. Some people really like it. Some people really hate it. Personally, I don't see any down side. It's a great way for independent artists to fund their projects. Think about it from a musician's perspective. You want to get your music out there. Your fans are loyal enough to pre-order the record or even donate funds. Everybody wins. I know it's not how things "used to be done", but this is a new age of DIY. Anything that's helping underground bands is a good thing in my book.

Tonight We Strike have launched a one-month Kickstarter campaign. There's a ton to like about this band before you've even heard a note of their music. They tout a message of "free thought and positive social change". They've made their demo available for free on-line. They're from the Delaware Valley. The great Donnie Switchblade is in the band. They have one of the coolest band names ever. But you know I wouldn't be writing about them if they sounded like Nickelback. Tonight We Strike freakin' rock! They play a modern variant of melodic punk with heart and grit. Think Bad Religion meets Swingin' Utters with a touch of Social Distortion and some obvious sonic and spiritual parallels to The Clash. You can hear the entire demo over at ReverbNation. For more information on the band's Kickstarter campaign, click here for the particulars. They're trying to raise $2500 to put out a 7-inch EP. Quite a noble goal, wouldn't you say? It's great to stream digital tracks, but there's nothing quite like dropping the needle on a vinyl record. Donors of $400 or more will receive a personal ukulele lesson from guitarist Kyle DeMilner. Hey - it never hurts to ask!