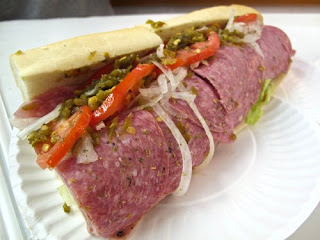 Tomorrow begins that most wonderful time of the year – football season. For the next 23 weekends, all activities in the Rutledge household will be arranged around the television gridiron schedule. And since the Marzen (a.k.a. Oktoberfest) beer season generally begins around the same time, the arrival of September is always a doubly glorious occasion in my life. One ritual of ours is to consume Italian subs on game day (i.e., when Notre Dame plays). I’ve found that you can get a sub almost anywhere, but a genuine first-rate Italian sub is hard to come by. I, for one, think everything on the menu at Subway is gross. Luckily there’s a local establishment called The Deli of Italy that claims to sell “the best sandwiches in ”. Of course they’re making a truthful claim (it’s not like there’s much competition in that department!). Better yet, they are one of the few shops in the entire state that can properly make an Italian sub. A first-rate Italian sub has begun to rival the Philly cheesesteak for the title of most popular sandwich in our home. And since most people’s idea of an Italian sub is to just stuff some salami and ham into a roll, I will now summarize the key components to this heavyweight of the sandwich world:
The Roll
As is the case with a cheesesteak, a quality roll is crucial to the success of an Italian sub. Preferably, your roll is of the Italian style, slightly crunchy, and fresh-baked. A foot-long hot dog roll will not do.
The Meats
There’s nothing wrong with your basic deli ham. But for maximum flavor I prefer Italian cured pork cuts (Capocollo, Prosciutto) and bolongas (Soppressata, Mortadella) in tandem with or Sicilian salami. Some of these cold cuts may seem “chewier”, but from a taste standpoint they’re spicier, smokier, and far tastier than run-of-the-mill lunchmeat. As is the case with my beer-drinking habits, I have expensive tastes when it comes to cold cuts. I’ll think nothing of dropping nine bucks on a 12-inch Italian sub made with top-of-the-line imported meats. It’s worth it.
The Cheeses
Provolone is king, and fresh mozzarella is flat-out to die for. Come on: who puts American cheese on an Italian sub?
The Toppings
Start with your traditional hoagie toppings: lettuce, tomatoes, onions. Then pile on hot peppers. The topper should be a spicy, oil-and-vinegar based Italian dressing. Mmmm!
Our go-to Italian sub comes with Sicilian salami, capocollo, prosciutto, and fresh mozzarella. My wife likes to special-order hers, substituting mayo for the oil and provolone for the fresh mozzarella. She also skips the onions and hot peppers. I’m more of a traditionalist and love the zing of the peppers and oil. Either way, it’s the roll and the meats that really make the sandwich. I’ve not been able to replicate a Deli of Italy sub with store-bought ingredients, but I can at least mimic the spicy kick by using hoagie spread (a glorious mix of crushed red peppers and vinegar that’s popular on the East Coast) and Tallarico’s hot chip steak peppers. These two ingredients can give any ordinary sandwich that special “Philly” flavor. And while a Philly hoagie and an Italian sub are not necessarily the same thing (“Hoagie” in these parts is just regional slang for any sub), they’re at least close relatives. If you live in , you probably think the Italian sub was invented there by Italian immigrants around the turn of the 20th Century. But it’s just as likely that Philadelphia’s first versions of Italian subs, hoagies, were developed at the same time or even prior to it (in kind of the same way that The Ramones and Saints both “invented” punk rock in the early ‘70s without any knowledge of one another). The sub sandwich, like punk rock, has evolved somewhat over the decades. I like to think of the modern-day Italian sub as The Registrators' 16 Wires of hoagies – the best and most highly evolved! Seek one out and enjoy!
- L.R.
Posted by Lord Rutledge at 3:08 PM

American cheese on an Italian sub is like having twelve teams in the Big Ten. It makes no sense. I'm with you, man. Oil and peppers all the way!

My dad has been on a perpetual quest to find the "hoagie of his youth". He and my mom travel all across southeastern Pennsylvania in search of this holy grail of subs. And he's still yet to find "the one". His main gripe: nobody puts on enough onions. Even when he gets extra onions, he wishes there were more. I keep telling him that if all he wants is more onions, he could make that sandwich at home!

I like onions on subs. Not too many, though.

Im in, except for all the green bugers. We have a shop in these parts called Penn Station that has some dececent sandwiches. Its not uncommon to pay upwards of $9 for a large sandwich. People are all like "i cant finish a large sandwich AND large fries" but I do all the time. Penn Station is expensive but mighty tasty... and i never realized it, but i suppose somehow linked to penn. the state too despite being a local company (i think)

G, what is your stance on onions on hot dogs?

I've seen Penn Station before in Toledo but have never partaken. I've looked into this joint, and it does seem pretty legit in terms of honoring the Philly/East Coast variant of the sub. I too have no qualms with shelling out $9 for a top-notch sub. My only gripe: it appears that their cheesesteak only comes with provolone. No Whiz? Come on!