The Beatersband - "Love I Can B W You" 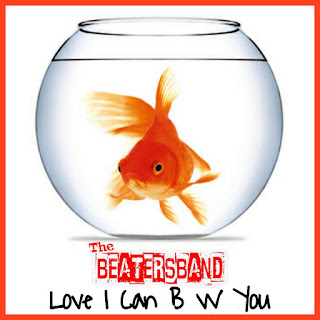 I previously reviewed Italian trio The Beatersband in September of last year --- offering high praise for the band's covers collection Vol Due. I was immediately won over by The Beatersband's perfect execution of a great concept. Essentially this band aims to modernize the sounds of late '50s and early '60s pop and rock and roll by adding a contemporary punk rock edge. And while The Beatersband could have continued on as an oldies cover band without any complaint from me, I am delighted to hear the group present entirely original material on its brand-new vinyl single "Love I Can B W You". These songs retain the feeling of The Beatersband's previous recordings while also demonstrating that Donatella Guida possesses a songwriting prowess that matches her beautiful voice. Both the title track and B-side "My Mother Plays Rock'n'Roll" combine the timeless melodies of early rock and roll with a punchy, punk-influenced guitar sound. Compared to the songs this band has covered, these two tracks are very similar in both style and spirit. The melodies are strong, the musicianship is top-notch, and the production is stellar. This single is great fun for all generations of music lovers. Copies are available here in the U.S.A. from River Monster Records (only five remaining at the time of this review!) and in Europe directly from the band. Grab one while you still can!
-L.R.
https://rivermonsterrecords.bandcamp.com/album/love-i-can-b-w-you
https://thebeatersbandvintagepunkrocknroll.bandcamp.com/album/love-i-can-b-w-you
https://www.facebook.com/thebeatersvintagepunkrocknroll
https://www.instagram.com/thebeatersband/
https://www.youtube.com/channel/UC6xWKEJVrYZZI3zzlOvDHlg
Posted by Lord Rutledge at 6:07 AM