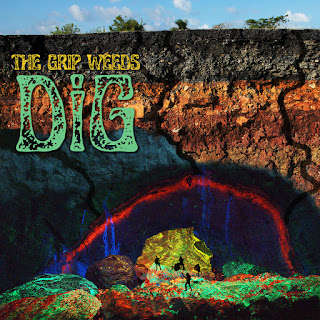 Still going strong after thirty years plus, The Grip Weeds are psych-pop legends in their own right. On their 9th studio album (and third with JEM Records), the Grip Weeds have chosen to pay tribute to some of the songs that inspired them to make music in the first place. DiG features the band's take on 14 classic songs from the heyday of garage rock and psychedelic pop. The songs cover the time period of 1964 to 1969, with the majority of tracks focusing on the golden years 1967-68. The idea was to revisit these songs many decades later with the benefit of their present-day wisdom and experience in the studio. In his liner notes, Lenny Kaye (Yes, THE Lenny Kaye!) remarks that The Grip Weeds have always honored the bands that first inspired them to make music. "Shape of Things To Come" was actually the first song the band ever recorded and a staple of its early live set. And while the band quickly became adept at writing original material in the style of '60s pop, psych, and garage rock, it never stopped acknowledging and celebrating its influences. DiG is a love letter to the songs that made The Grip Weeds. We all know and love these songs, but the band was not content to just record straight copies and be done with it. Kurt, Kristin, Rick, and Dave imbue these songs with their well-honed production expertise, seasoned chops, and masterful three-part harmonies. Appropriately enough, "Shape of Things To Come" is the opening track. As a huge fan of Wild in the Streets, I was naturally delighted! Elsewhere, the band offers up a stunning acoustic rendition of The Zombies' "I Love You", a gorgeous take on The Byrds' "Lady Friend", and a splendid interpretation of The Gants "I Wonder" that could easily be mistaken for a modern-day power pop track. If the Grip Weeds sound supremely in command of Paul Revere and the Raiders' "Louie, Go Home", that's because they have routinely played it when they've backed Mark Linsday on stage! Other standout tracks demonstrate how this band is equally adept at rocking out three-chord style (The Knickerbockers' "Lies") and going all-on on psychedelia (Thunderclap Newman's "Something In the Air"). And while there have been plenty of covers of "Journey to the Center of the Mind" over the years, here the Grip Weeds fully tap into the song's potential to blow your ears clean off.
In the process of making DiG, The Grip Weeds found so many songs they wanted to cover that they couldn't fit them all onto one album! Therefore, there are two versions of this album: a single album and a deluxe edition double album that tacks on 11 more covers ranging from the Nightcrawlers to the Electric Prunes to Cream to the Monkees to the Turtles. Both versions are available from The Grip Weeds' web site, Amazon Music, and fine record stores everywhere. Fans will enjoy this band's inspired dive back into its roots. And if you love all these classic songs and somehow are just discovering The Grip Weeds, say hello to your new favorite band!
-L.R.
https://www.gripweeds.com/
https://www.facebook.com/gripweeds/
http://www.jemrecordings.com/
https://www.facebook.com/Jem-Records-607560186079388/
Posted by Lord Rutledge at 12:56 PM