Red on Red Hots: Year One Compilation From Red on Red Records 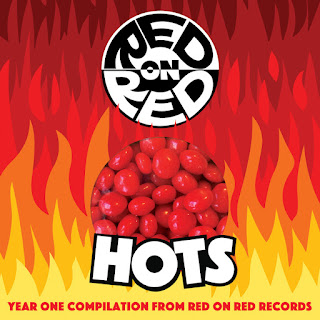 While I do face many excruciating decisions as I begin to assemble my best of 2021 list, one selection is already a stone cold lock. Red On Red Records will be label of the year, hands down. When you look at the quality and consistency of this label's output, it can be shocking to realize that Red On Red just marked its first anniversary last week! In celebration of her label's milestone, Justine Covault has assembled a deluxe compilation featuring some of Red on Red's top singles so far plus several brand-new tracks. Red on Red Hots: Year One Compilation From Red on Red Records makes good on its massive title with a non-stop parade of underground hits. Featured here are several songs I consider among this year's finest -- such as Kid Gulliver's "Beauty School Dropout", The Chelsea Curve's "Drag", Andrea Gillis's "Leave the Light On", The Jacklight's "Beach", and Linnea's Garden's "Replacement". This comp also caught me up on ace tracks I previously missed from Cold Expectations and Stupidity featuring Keith Streng. Highlights among the new songs are Justine and the Unclean's roots-rocking version of Justine's Black Threads' country tune "You and Me Against You and Me", Sugar Snow's beautiful rendition of Roy Orbison's "Blue Bayou" recorded in tribute to Simone Berk's father, an unreleased recording of The Neighborhoods' epic rocker "Crown Victoria", and an amazing synth-poppy track from Boston's Speedfossil. On top of that, this album finally brings us the long-awaited release of the Red on Red theme song as performed by the label's house band Red On Red Records Rockers! Having grown up in a time when it was not unusual for music to be advertised on TV and radio, I am completely enthralled with this earworm of a jingle! "Music, records, rock shows and more" is a mission statement we will all happily endorse!

Red on Red's output over the past year has been beyond impressive. Justine has assembled a roster featuring many of the finest garage, punk, power pop, and indie rock bands from Boston (and beyond!). She has worked relentlessly across the world of social media, underground radio, music blogs, and the live music scene to promote her artists. Of course I love the music, but Justine's passion is what makes this label truly special. Her vision for the label was "to create a place where good bands with good songs could get more ears on their music". Well I'd say that's a huge mission accomplished for year one -- which Red on Red Hots wonderfully documents in tangible form. A lot of labels would be happy with a compilation this good after five or ten years! Happy birthday, Red on Red. I am excited for even bigger and better things in year two!