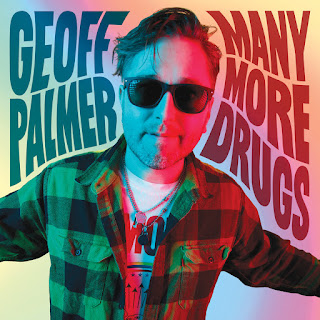 Smash hit alert! Geoff Palmer is back with a new solo single, and it's a total banger! That should hardly be a surprise considering the consistent quality of his solo output in 2018-19. And of course his collaborative EP with Lucy Ellis almost saved 2020. "Many More Drugs", off of the forthcoming album Charts & Graphs, is a vintage Geoff Palmer number. It's upbeat pop/punk that's catchy as hell and above all else FUN! Seriously: if this song doesn't put a smile on your face, there's probably no hope for you! "Too Many Drugs" tells the hilarious tale of a young Palmer mishearing the lyrics to the Dickies classic "Manny, Moe And Jack" and his subsequent challenges in finding the song on record. That's a funny story --- and it's one that almost all of us can relate to. The Dickies were surely a rite of passage for anyone who came to love poppy punk rock over the last 40 years. And as much as I love the way modern technology gives us instant access to a seemingly limitless library of recorded music, I must admit there was something really thrilling about the days when you had to track down a record if there was a particular band or song you wanted to hear. "Many More Drugs", while definitely an homage to "Manny, Moe And Jack", is above all else an anthem for music geeks. It's available now as both a digital single and a 7" release from the mighty Stardumb Records. The 7" features two exclusive non-album B-side tracks. They're so exclusive that if you want to hear them right now, you'll have to --- you guessed it --- buy the record! Charts & Graphs will be out July 23rd, 2021 on Stardumb, Rum Bar, Memorable But Not Honorable Records!