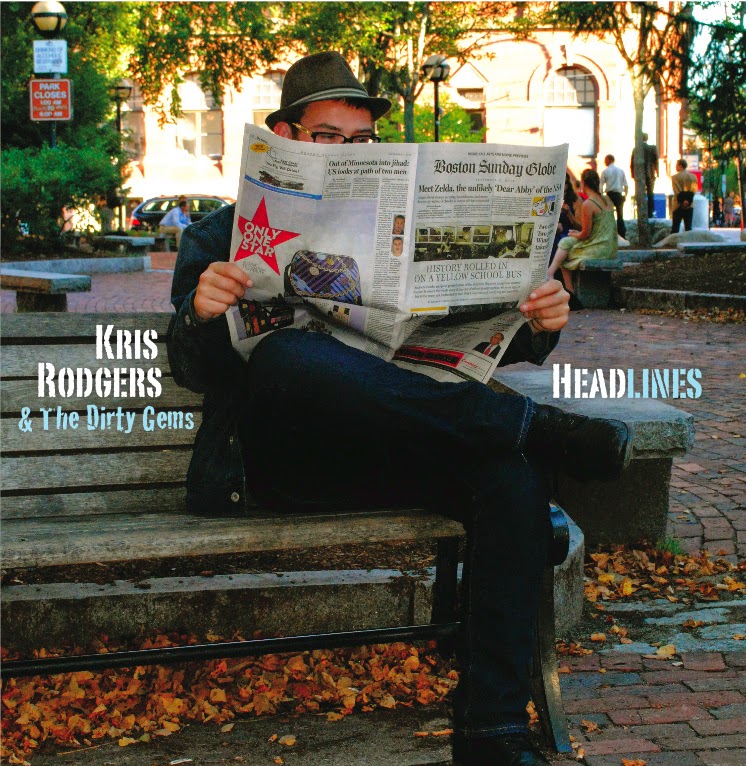 I have, in prior posts on The Connection and The New Trocaderos, lauded the piano work of Kris "Fingers" Rodgers. He plays rock n' roll piano with such passion and pizazz that I'm tempted to believe the reincarnated spirit of Johnnie Johnson dwells within him. He's a versatile performer- as comfortable entertaining in a piano bar as he is laying down studio work that would make Little Richard squeal in delight. What you might not know about Kris Rodgers is that he's been fronting his own band for a number of years - and he's got an unbelievable singing voice. Backed by a full rock n' roll band called The Dirty Gems, Rodgers has delivered the excellent Headlines - an album that takes us back to the heyday of piano-driven classic rock and pop-rock.

Out on Collectors Club Records, Headlines includes contributions from a number of individuals within The Connection/Kurt Baker family. Baker plays bass, Craig Sala is on drums, and Wyatt Funderburk mixed the album at his Nebulon II Studio in Nashville. The Connection's Geoff Palmer is one of several outstanding guitarists Rodgers recruited to play on the record. Headlines, without question, is an album worthy of its star-studded cast. In addition to being a phenomenal pianist and dynamite singer, Rodgers also excels at songwriting. He's written a number of tunes that sound like potential hits - or at least potential hits if 1976 had never ended. The title track kicks off the record with a bang- suggesting what it might have sounded like if Elton John had sat in with Cheap Trick when both acts were really killing it. The chorus just knocks me out, and Rodgers sings every note as if his life depended on it. If you didn't know this guy was a piano specialist, your first reaction might be, "Holy smokes, what a voice!" Elsewhere, tracks like "Waiting Fool" and "Up From The Ashes" have me fondly recalling a time when Billy Joel still wrote great pop songs. You'd expect Rodgers to be able to turn out a quality piano ballad or two - and he's given us two great ones in "You Don't Know" and "Borrowed Time". Looking for something unexpected? I'm pretty sure Rodgers is the first singing pianist to ever cover the legendary proto-punk band Death (the 1976 B-side "Keep On Knocking"). He and the Dirty Gems definitely make the song their own.

There are a lot of people of a certain age who will be pleasantly surprised to know that music like this is still being made. But by no means is Rodgers pandering to the geezer demographic. Headlines is not so much stuck in the '70s as it is inspired by the timeless recordings of some of that decade's finest singer/songwriters. Of course your dad will like this album - but so will anyone who's into today's garage/rock n' roll scene ("Headlines" will be featured next week as Little Steven's Coolest Song In The World). If there's one thing I could say for sure about this album, it's that it freaking rocks. Songs like "No Complaints" and "Leaving Town" should dispel any stereotypes about piano rock being wimpy or uncool, and it's not hard to imagine how any of these tracks could translate to a full-blown arena rock show. I just love the fact that Rodgers went to such great lengths to craft a pop-rock record in the classic style. He's such a formidable talent in his own right, but the terrific band he assembled really takes it over the top. And in collaboration with Funderburk, he's produced one of the best-sounding records I've heard in a long time. If you're like me, Headlines will leave you wondering why more rock n' roll bands don't feature piano!