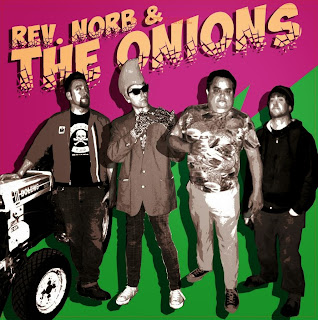 Now we're talking! Following two killer EPS, Rev. Norb & The Onions have delivered a self-titled album that does NOT disappoint! The Onions - the pride of Manitowoc, Wisconsin - were already a terrific band before they took on the fabled front man Norb (Suburban Mutilation, Boris the Sprinkler). But in joining forces, these two entities have created a veritable dream team of garage/punk/rock n' roll goodness. Somehow this outfit combines everything I've ever loved about all of Brad X's prior bands with everything I loved about Boris the Sprinkler. Mix those elements together, and you'd expect some raw & ripping garage punk imbued with the oddball vocal stylings and lyrical high strangeness that could only originate from Norb's peculiar brain. Throw in a dash of kick-ass surf guitar, and that's pretty much it! If Boris the Sprinkler was too "pop-punk" for your tastes (to me, their sound was more classic '77 punk), you'll be happy to discover that Rev. Norb & The Onions are more of a sock-you-in-the-face kind of band. And who doesn't love a good face-socking? Forget what the hipster element is trying to sell you. This is the true spirit of garage punk: trashy, lo-fi rock n' roll recklessly unfurled by beer-guzzling Midwestern degenerates subsisting on a steady diet of The Stooges, Fun Things, and Killed By Death compilations. I have always associated the state of Wisconsin with bands like this - the travel brochures of my mind depicting joyous nights spent sampling fine beer & cheese whilst observing legions of garage punk greats bringing the noise in their natural habitat. Whether The Onions are reviving this tradition or merely sustaining it, I will continue to believe that there's something very special in that Lake Michigan water.

With seven of this album's 12 tracks clocking in at under two minutes, it's obvious that Rev. Norb & The Onions aren't screwing around. Norb will always be Norb - and the world is better for it. But with The Onions, he has reigned in the schtick and returned to the form that helped make him a legendary figure in American hardcore. Songs like "Teenage Tantrum", "Bore Me", and "I'm Shit" rip with speed and fury, while "Negative 13" brings to mind some of the "harder" Boris The Sprinkler songs. The band deviates from its primary course just enough to keep things interesting. Nods to '60s party garage ("Oddy Knocky") and pure '77 punk ("She's A Stain") are true standouts. And "Where Zombies Chill" sounds like the MC5 crashed a Misfits Halloween party and burned the place to the ground. If you've been following The Onions in recent years, this album is every bit the smasher you were expecting. And if you're a Norb fan, this is easily the best album he's been a part of since the late '90s. This is a surer thing than Aaron Rodgers against the Eagles' secondary. Buy immediately!