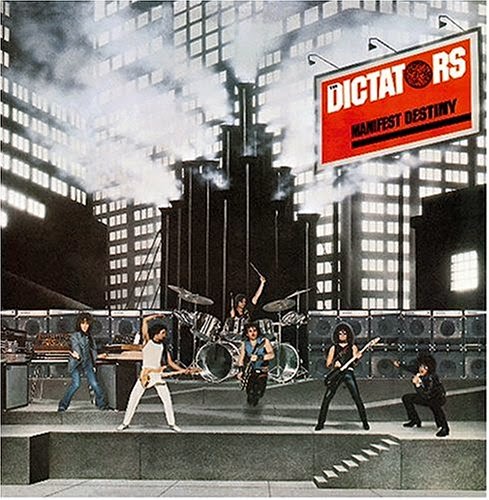 How great were The Dictators? So great that even their "bad" album is darn near a classic. Conventional wisdom says that 1977's Manifest Destiny was at best a blatant sellout and at worst a weak entry in an otherwise unassailable catalog. In no way do I concur with this sentiment. Straight up, Manifest Destiny freakin' rocks! It may not be the first Dictators album you should buy. But like all the The 'Taters albums, it belongs in the collection of every human being who knows good music.

Discouraged by the poor sales of their brilliant debut album Go Girl Crazy, The Dictators found themselves wondering if the general public was capable of "getting" their ironic/satirical lyrics. Lead songwriter Andy Shernoff had actually quit the band for a brief time - replaced on bass by future Twisted Sister stalwart Mark "The Animal" Mendoza. Upon his return, Shernoff moved to keyboards. Determined to change their fortunes with the record-buying public, The Dictators set out to craft a more commercially viable sophomore LP. Shernoff's lyrics were intentionally dumbed down - and it was hard to deny that Manifest Destiny took aim at the lucrative arena rock market that KISS and Blue Oyster Cult were tapping at the time. The irony was that the album flopped every bit as badly as Go Girl Crazy. Let's face it - The Dictators were such an incredible band that they couldn't have "sold out" even if they'd tried. And while some would say they did try, Manifest Destiny has proven over time to be far more musically credible than most people think. With a couple of notable exceptions (The Dictators were never meant to do ballads), the material is quite good. Shernoff, one of the all-time great songwriters, just wasn't capable of penning a bad tune. And in his attempt at writing trite rock lyrics, there's an essence of parody in some songs ("Disease") and outright brilliance in others ("Science Gone Too Far").

Sequenced as it is, Manifest Destiny is like two albums in one. On the first two-thirds of the record, The Dictators make their play for mass appeal with a mix of radio-friendly pop songs, intended arena anthems, and corny ballads. The final third of the album, on the other hand, is like a blueprint for the band's future direction. Handsome Dick Manitoba was transitioning from "secret weapon" to full-time lead singer, and he leads the charge on the hard-driving originals "Science Gone Too Far" and "Young, Fast, Scientific" (two of the band's greatest songs) plus an inspired cover of The Stooges' "Search and Destroy". But while it's reasonable to wish that there were more songs on this album like its final three tracks, the "sellout" portion of the album is not without its gems. "Exposed" is one of my all-time favorite Dictators songs. Perhaps on the heels of Go Girl Crazy, this number was not particularly well-received by hardcore fans. But if it were to come out today, most people would describe it as really good power pop. "Disease" - rescued from its lyrical ridiculousness by Handsome Dick's genius spoken word intro and engaging vocal performance - is pure horror rock fun. And for all of the cheesiness it embraces, "Heartache" boasts a hook that should have made Shernoff millions.

One thing that needs to be remembered is that The Dictators never claimed to be a "punk" band. Their existence predated punk music - and no doubt they influenced it with the attitude they presented and the Detroit rock/'60s garage inspired sounds of Go Girl Crazy. If Manifest Destiny sounds largely like the work of a completely different band, there's really no sin in that. Overly "commercial" or not, it's a very good album from one of the greatest rock n' roll bands of all-time. Four of its nine tracks, in fact, were deemed good enough to appear on the band's new Faster... Louder best-of collection. I would urge the uninitiated to swiftly get their mittens on 1978's Bloodbrothers and the extraordinary 2001 "comeback" effort D.F.F.D.(my personal favorite 'Taters album). But it would be a mistake, I assure you, to sleep on Manifest Destiny.