Return of The New Trocaderos! 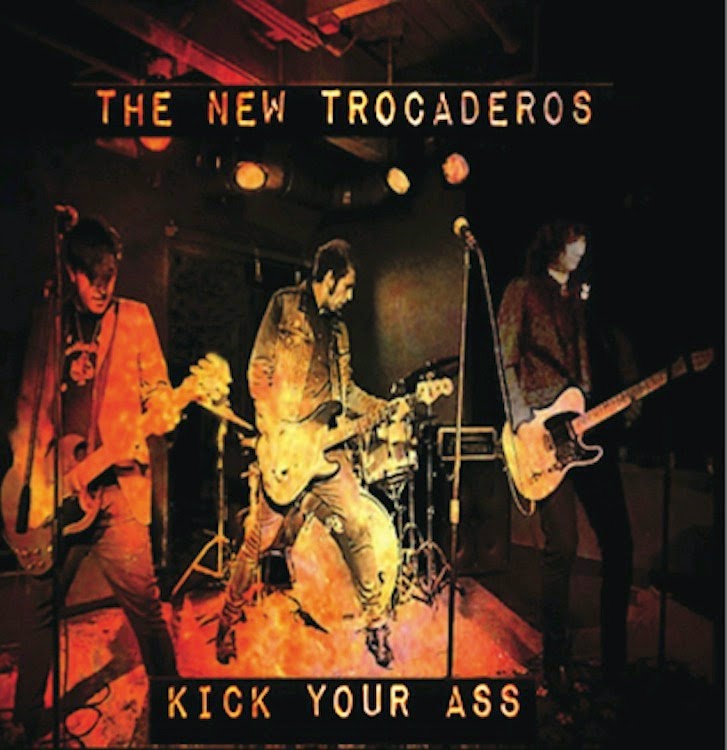 Check it out! It's not even November yet, and I'm already making a final call on EP of the Year. You can start carving the trophy. As far as I'm concerned, The New Trocaderos have got it locked up! I first proclaimed this band's greatness on the second day of this year - and my big hope was that this would be more than just a one-off project. Well, to my utter delight, this super-group is back with a second helping of rock n' roll/pop/garage goodness that ought to have the entire world dancing and singing along! The New Trocaderos are Brad Marino and Geoff Palmer of the almighty Connection along with the king of power pop, Kurt Baker. Once again, these three have collaborated with L.A. songwriter Michael Chaney - and they've somehow managed to top their sensational debut single "Money Talks"/"The Kids" (a fixture this year on Little Steven's Underground Garage).

The new record is called Kick Your Ass, and it builds off the energy of "Money Talks" without coming off like a carbon copy. This time around, all three New Trocaderos take turns singing lead. And each track has its own distinct feel. Kurt's up first with "Real Gone Kitty" - a high energy shaker in the style of late '50s rockabilly and rock n' roll. Like The New Trocaderos have been known to do, here they acknowledge influences (Carl Perkins, Jerry Lee Lewis) and lyrical themes from rock n' roll's golden age yet find ways to make them sound fresh for a contemporary audience. The red-hot piano work of Kris "Fingers" Rodgers would probably bring The Killer himself to tears of joy, and all in all this song joyfully celebrates youth, fun, and the endless pursuit of pretty girls. Again and again, I'm implored by this number to stop whatever I'm doing and start dancing around like a maniac. I am now banned from taking headphones into Whole Foods.

Next up, Geoff sings "Dream Girl" - a gorgeous '60s pop jangler a la Beatles/Beach Boys/Byrds. Again, it's a fresh take on a classic style - with melodies to die for and a vocal treatment that brings to mind a young Nick Lowe. I will warn you in advance that getting this song unstuck from your head may require professional help of some sort. Oh my god, that bridge! Those harmonies and handclaps really hit the spot, and let's hear it for the lost art of the fade-out ending! This is just perfect pop - and a major step forward for this band in terms of production and musical sophistication.

To close out the EP, Brad takes the mic on "Brain Gone Dead". This is about as flawless of a Ramones homage as you could ever hope to hear - replete with morbid nursery rhyme lyrics you won't be able to resist repeating. There's a neat little guitar hook in there that adds a lot to the song - the kind of minor detail that can separate a great band from a not-so-great band. With Brad's distinct vocal style, of course you're going to be reminded a little of The Connection. But what I like about The New Trocaderos is that these three guys all show something a little different when they record under this name. It's not like someone just put a solo Kurt Baker song and a couple of Connection tunes onto a record and passed it off as a new group. Chaney, essentially the fourth New Trocadero, has found the perfect musicians to bring his creative vision to life. Here you have three equally good singers - each with a keen ear for pop craftsmanship and timeless rock n' roll melodies. And the addition of "session" players Rodgers and drummer Craig Sala (Kurt Baker Group) has only made the band better!

What I love about this record is that I'm completely unable to pick a favorite track. There's not one hit here but rather three of them - each one taking inspiration from a different period of rock n' roll that I personally hold dear. Of course The New Trocaderos "borrow" from all the right influences. But just as importantly, they do their heroes proud by crafting songs good enough to hold up in any era. And that, more than anything else, is the mark of great rock n' roll.

http://thenewtrocaderos.bandcamp.com/
Posted by Lord Rutledge at 8:41 AM