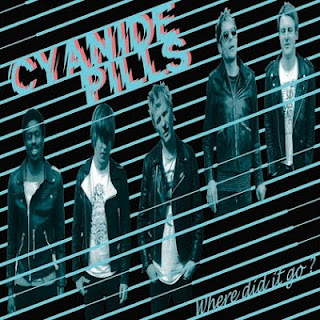 I've been talking a lot lately about how the current wave of U.K. punk rock is the best in decades. I've already posted on The Gaggers, The Ricky C Quartet, and The Ten O Sevens. And the thing is, I've only scratched the surface! Hailing from Leeds, the Cyanide Pills are another favorite of mine from this "new wave" of English punk. They started out with kind of a Boys/Buzzcocks old school poppy sound by way of The Briefs, and somehow they seemed to pull off that type of thing better than a lot of their American counterparts. But on their brand single on Damaged Goods, they've got some new tricks up their sleeve. I'm not saying that they're "maturing", but clearly the Cyanide Pills have avoided the temptation to completely repeat themselves. With a new album due early next year, these lads really seem to be hitting their stride!

A-side "Where Did It Go?" is simple and catchy with a heavy Jam feel and some Clash-like power riffing. I love the tasty little guitar licks, and the chorus will quickly sink its hooks into you. Quality stuff! On the flip, "Lock Me Up" slows the tempo a little and has a darker vibe to it. Again these guys really know how to spin a catchy melody, and in this case there's something vaguely chilling about the tone. I really like both tunes, but in this case I may give the slight edge to the flip side. It really shows how this band is growing in their writing, putting the proverbial "unique spin" on their '77 U.K. punk influences. In a good way, there seems to be somewhat of a "Brit-pop" thing going on here as well. If this is a teaser for the new album, consider me teased! So really, let's have no more talk about the world coming to an end. I've got music to look forward to!