The Clash or the Pistols? 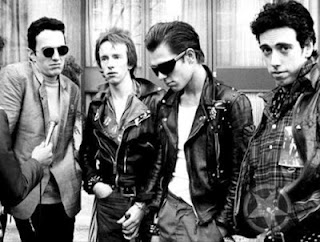 It's been a while since I did a band battle post. This one's kind of an old chestnut amongst punk rock debaters, but that's okay. I do enjoy the classics. Let the heavyweights slug it out!

My personal stance on this topic is no secret. The Clash is not just my all-time favorite punk band but also my all-time favorite band of any genre. The only band that matters! But the Sex Pistols are right there behind 'em - my second favorite punk band ever. So, then. Who are you taking: The Clash or the Pistols? I know you love both. But what if you had to choose? There's no wrong answer here. Just a matter of personal preference. Rotten or Strummer? "White Riot" or "God Save the Queen"? Mick Jones or Steve Jones? Never Mind the Bollocks or London Calling? Sid's sneer or Simonon's smashed bass? The debate has raged for decades in regards to who was the greater band. But I'm more interested in who you like more. Forget arguing about influence or importance or even musical talent. When push comes to shove, which of the two do you listen to more often? Whose music does more for you personally? If you could take a time machine back to 1977, which band would you be more excited to see? No pun intended, we've got ourselves a veritable clash of the titans. I have cast the first vote. Now it's your turn.

come on, man! Sex Pistols were "important", but they weren't good. Clash were both. This is not even close. CLASH.

That makes it 8-0 so far. People are gonna think I stacked the deck! Perhaps I did...(cue evil laugh).

Drummed up two dissenting votes so far on my Facebook wall. I do like a fair fight.

The moment the Pistols ditched Glen Matlock and brought in Sid Vicious, they became a band that favoured style over substance. Sid was a cartoon, and it's a shame he became so synonymous with punk – forever associating it with violence and buffoonery. The Clash not only made one of the great old-school punk albums with "The Clash," but went on to create stylistically diverse music. I'm not one the diehards who insist "Sandinista" is their best record, but I admire a band so willing to stray from its faster and louder roots. The Clash win in a landslide.