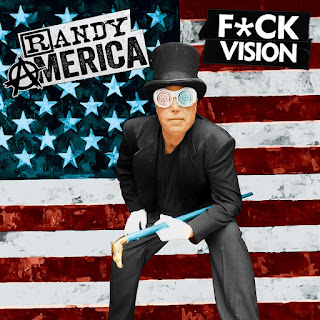 "Randy America" is one of the all-time great punk rock pseudonyms, and F*ck Vision is possibly the greatest album title in the history of recorded music. That's an awful lot to live up to! But the first solo release from the former Jake and the Stiffs singer is pretty much what I expected it to be - brilliant. Just a few months ago, I stated that Mr. America was the single most overlooked punk songwriter of my generation. Strong words, eh? Now I have the opportunity to demonstrate that I'm not completely full of shit! F*ck Vision is out. And if you don't like it, you're really gonna have to question my judgment when it comes to music. But I'm confident that you're gonna love it. Yeah, I know I'm biased. But come on! It's Randy fucking America! He's practically royalty in at least two counties of Delaware! He's the John Daly of pop-punk! He won't let you down.

Let's make it clear that F*ck Vision is not a Jake and the Stiffs album. It's a Randy America solo record. There are a few songs that will remind you of Jake and the Stiffs - which is understandable given the uniqueness of Randy's singing voice and his knack for penning perfect little pop-punk tunes. Songs like "Yo-Yo Girl" and "I'm Glad I Said Goodbye" are "classic" Randy America all the way. No doubt, bands like The Dickies and Boys (he covers "Brickfield Nights") remain fundamental influences. But a large portion of F*ck Vision finds the man breaking new ground and having a go at a more power pop/alternative rock type sound. It's been at least ten years since he last released any new music, so the "growth" in his songwriting repertoire is not exactly surprising. God bless him, he's still a pop guy through and through. He delivers more quality hooks than Bass Pro Shops, and any given song on the album is liable to get stuck in your head for weeks on end. I know a lot of guys who'd commit gruesome murder for the ability to craft the chorus to "Do You Wanna Runaway". But just like Cole Hamels after he developed a cutter and curveball, Randy has taken his game to a whole new level. "Sunrise Song" recalls the crunching alterna-pop of the '90s (think Superdrag), while "Shadows and Shade" achieves an improbable blend of soaring melodies and heavy post-hardcore guitars. It's like Rivers Cuomo wrote a song for Helmet! There aren't a whole lot of "epic" pop songs out there, but "Cecile" is exactly that. And the thread that holds it all together is Randy's peculiar vision. He's got almost as many funny voices as Joe Conklin. His lyrics are clever, twisted, and often hilarious, especially when he's tackling the timeless subject of messed-up relationships. When the first line of the album is "I've thought about blowing my fucking brains out too many times since I've met you", it kind of sets a tone!

Those of us who are fans have really missed Randy America over the last few years. There's no one else like him. And given the surging popularity of powerpop/punk as a sub-genre in recent years, there finally seems to be a market for the man's music (Jake and the Stiffs were probably too punk for the pop crowd and too pop for the punk crowd). Thankfully he decided to release these songs he's been writing and recording at home. And now he has assembled a backing band called The Pike Creek Pinups, comprised of members of The Keefs (the first band I ever reviewed for this blog!). It cannot be denied: Randy America is back for reals! You can stream F*ck Vision for free over at Bandcamp. If you like what you hear, buy a copy or two or ten. Who mastered this thing? It sounds like a million bucks!