Beyond Veronica rocks the pop! 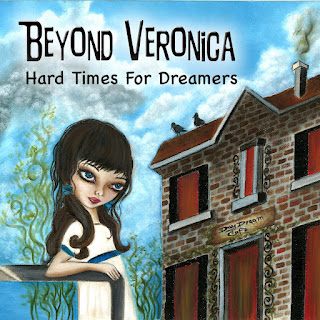 Granted, I've always had a major weakness for female-fronted power pop. But while Beyond Veronica fit the bill to a T, they're so much more than mere heirs to the Blondie/Muffs prototype. What separates this band from the pack is that they draw liberally from the garage rock and girl group sounds of the 1960s - and then seamlessly blend those influences with more modern elements of power pop and '70s punk. Style-wise, their bang-on mix of garage and power pop will appeal to fans of both genres. Just as importantly, they bring some serious talent to the table. Bonnie Veronica and Kirk Larsen are a truly dynamic vocal/guitar tandem, and for sure this is a band that really knows how to write a good pop song. The group's second album Hard Times For Dreamers is 100 percent up my alley. But beyond that, it's really freakin' good!

As a pop guy to the core, I'm tempted to wish that every song on the album were in the same vein as opening track "If You Love Her". Talk about an instant hit! I'm always a sucker for high energy, super-catchy power pop. This song transports me to my happy place! But truthfully, one of the major strengths of Hard Times is its variety. If every song sounded the same, what fun would that be? I like it that this band is capable of everything from the gorgeous, tender jangle-pop of "My Friend" to the high-powered punk rock n' roll of "What You Want". And lead single "The River's Edge", with its haunting paisley pop sensibility, is more Pandoras than Muffs. Blessed with both a considerable songwriting acumen and serious musical chops (Larsen is flat-out phenomenal on lead guitar, and all the rhythm players knock it out of the park), Beyond Veronica really have the stuff to pull off a multi-faceted repertoire. They do power pop with real power and garage rock with hooks! A song like "Take You There" is pretty much '60s garage at its finest, while "Secret Things" ought to be on every power pop geek's best-of-the-year mix.

Conceptually, the idea of Beyond Veronica is a band in the spirit of all the great female-fronted punk and new wave groups of the late '70s and early '80s. With Bonnie Veronica in that strong female lead role, the stated kinship to the likes of The Avengers, Blondie, and The Runaways cannot be denied. But what I like is that Beyond Veronica aren't trying to be any of the aforementioned bands. They've got their own thing going on. Over the past ten years, Veronica and Larsen have cultivated a cool, distinct take on girl-fronted power pop. I'm glad to finally be hip to 'em! Add Hard Times For Dreamers to the ever-growing list of top ten caliber albums of 2012!