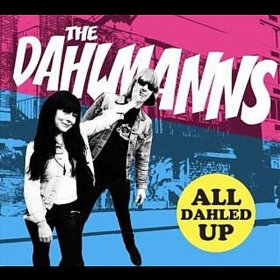 Merry Christmas to me! The Dahlmanns album is out! Talk about joy to the world! If you bottled the feelgood powers of The Dahlmanns' music, that shit would fly off the shelves. Even Ebenezer Scrooge would have found himself smiling and dancing within the first 20 seconds of "Get Up, Get Down". The Grinch would have geeked out to "Teenage City". Norwegians do it right!

Given my innate weakness for girl-fronted power pop and long-standing love of The Ramones, The Dahlmanns were destined to be Faster & Louder favorites. They were, in fact, the second band I ever reviewed on this blog. And in just a few weeks, I will officially award them my 2011 Song of the Year title for their flawless interpretation of Andy Shernoff’s "I Love You Baby (But I Hate Your Friends)". Here's what I love – that song isn't even on the album! They didn't need to pad their debut LP with a hit from months ago. Instead, they went out and wrote a whole slew of new hits! Andre Dahlmann, of the legendary Yum Yums, knows a thing or two about how to write a pop song. And his wife Line Cecile Dahlmann brings a sugar-rush of vocal exuberance that warms the soul like a Christmas cookie bender. Even when she's singing sad songs ("Love the Haters") or creepy ones ("Candypants"), you can't help feeling uplifted in spite of the lyrics. There's just a brightness to this band that is all prevailing. When Santa Claus gets the holiday blahs, this is the band he listens to to regain his good cheer. The big man loves his bubblegum punk!

While the new album does slow the pace in spots to explore more downbeat material, the results are absolutely golden. The jangly "This Time" is a sad love song with absolutely beautiful melodies, and it really demonstrates how pretty of a voice Line Cecile has. Think "Questioningly" by The Ramones with Frida from ABBA on vocals. Superb! And if the Dahlmanns are largely inspired by The Ramones and Primitives, the latter's influence is most palpable on the outstanding track "Going Down". The variety is nice! But I'd be lying if I said my favorite songs on the album weren't the more "classic" Dahlmanns type numbers. "Shake Me Up Tonight" is a stone cold hit. It's got everything: driving guitars, an unstoppably upbeat energy, harmonies out the wazoo, and infectious melodies oozing from every note! It ought to be a #1 single! And "Bright City Lights" might be even better. It's a perfect pop song with such an emotionally charged chorus that it seems it ought to be playing over the closing credits of a feelgood '80s movie! This, my friends, is POP! In an ideal world, "Teenage City" would be the album's third chart-topping single, and The Dahlmanns would perform it on network TV with a gazillion fans tuned in.

Goody, goody gumdrops! The Dahlmanns have delivered! Especially down the homestretch, All Dahled Up is an invigorating, fun-filled ride that typifies everything power pop is supposed to be. I had been eagerly awaiting this album for many months, and after all that buildup it would have been easy to have found myself at least slightly disappointed. Am I? Not even a little! All Dahled Up is everything I expected and then some. If it's not quite Album of the Year, it's firmly top three. And that's saying something considering that 2011 has been one hell of a year for music! Now bring us some figgy pudding!